Dangerous driving, blocking traffic and stunting just some of the infractions in Calgary car rally

CALGARY -- Calgary police say they are expecting to issue more than 100 tickets against drivers involved in a planned demonstration in the city's downtown core that grew out of control.

Officials say they were contacted last week by the organizers of Sunday's event aimed at drawing attention to the current violence ongoing in the Middle East.

At that time, police informed them of the rules and attempted to help put together a route for the rally, which would involve approximately 200 vehicles.

When the pro-Palestinian rally took place on May 16, officials say more than 1,000 vehicles participated and the situation deteriorated, with drivers deviating from the approved route and contributing to a number of safety concerns.

"Vehicles driving down the wrong side of the road, running red lights, blocking intersections for significant periods of time, drivers on their cellphones while passengers (including young children) hung from windows and sunroofs. Stunting, firing of flares and fireworks from within vehicles or in crowds, and significant noise levels late into the evening led to several complaints from residents in the area," police said in a release.

Through body-worn cameras as well as in-car digital video cameras, police say they have collected enough evidence to issue summonses to approximately 100 registered owners of the vehicles involved.

Police say no attempt was made to issue tickets at the time out of a concern of "escalating the situation."

Two people were arrested during the event, with one being charged with mischief to property and the other for an altercation. 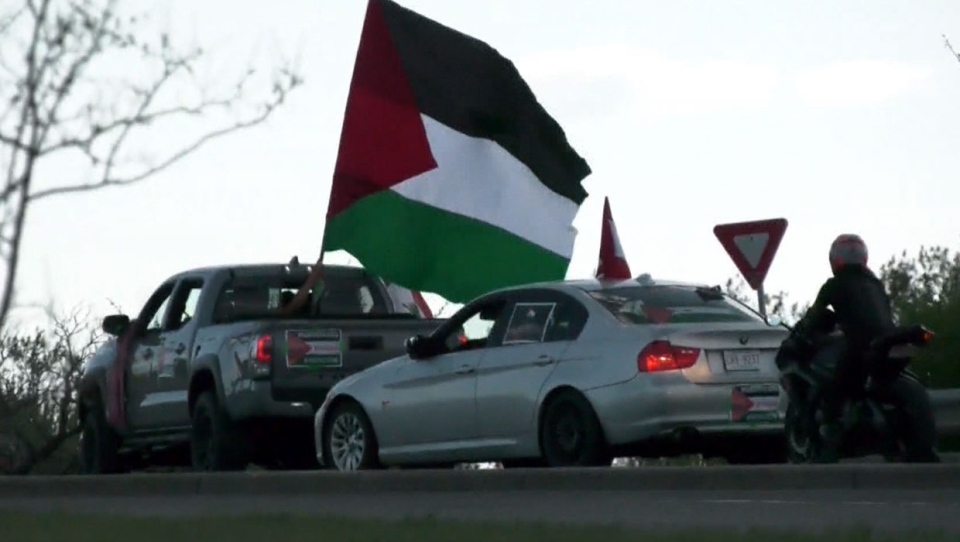 Calgary police say their intent behind releasing this information is only to inform the public about violations based on the behaviours of certain individuals involved.

"This information is not intended to paint all those that participated in the rally with the same brush," officials said.

"We also appreciate that it can be difficult for organizers of these events to fully anticipate the number of attendees and convey all of the agreed upon rules of engagement to all participants."

Calgary police say they will continue to work with organizers of future protests to ensure they are allowed to exercise their freedom of expression without putting the public or property at risk.