Deer with Christmas lights tangled in its antlers spotted in Okotoks

Alberta Fish and Wildlife says officers are keeping an eye on a deer in Okotoks, Alta. that seems to have a strand of Christmas lights caught in its antlers.

The organization said someone called to report the deer to officials on Nov. 3 after spotting it wandering in the Tucker Hill subdivision.

Responding officers found the deer was able to move freely and could still forage and find food, so it was left alone.

"In order to safely remove the wire, officers would have to physically restrain the deer and/or tranquilize it, which could cause unnecessary physical and mental stress," spokesperson Ina Lucila said in a statement.

"Officers will continue to monitor the situation and (will) take additional steps if needed for public safety or the deer's well-being."

In the meantime, Fish and Wildlife is asking Albertans not to approach the deer if they see it as it may cause it stress, or prompt it to "react defensively" to protect itself.

The deer still appeared to have the lights tangled in its antlers on Friday, Nov. 26 when Okotoks resident Bryce Lamont spotted him. 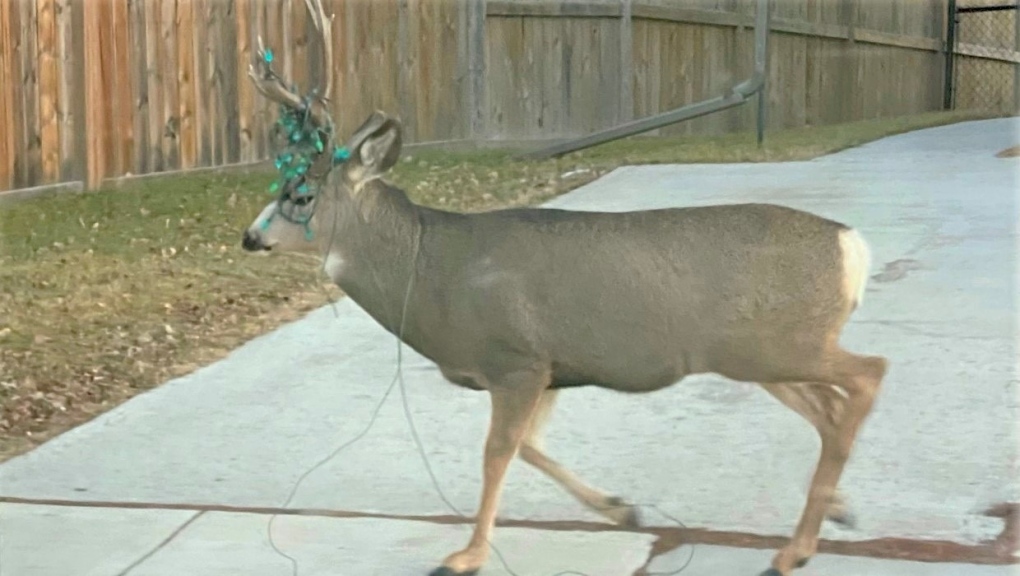 A photo taken in the Okotoks area shows a deer with a strand of Christmas lights tangled in its antlers. (Courtesy Bryce Lamont)

To help prevent situations like this in the future, Fish and Wildlife is reminding the public to be aware of things on their property can impact wildlife.

"At this time of year, Christmas lights wrapped around trees can also get stuck in a deer’s antlers, so we encourage any lights to be placed high up and out of reach."

How early do you put up lights and decorations?✨

In @BanffNP wait until Nov 30. Until then there is a higher risk of male elk & deer becoming entangled.🦌 Loose or low-hanging cords, lights, wires, & decorations can lead to an animal getting tangled.