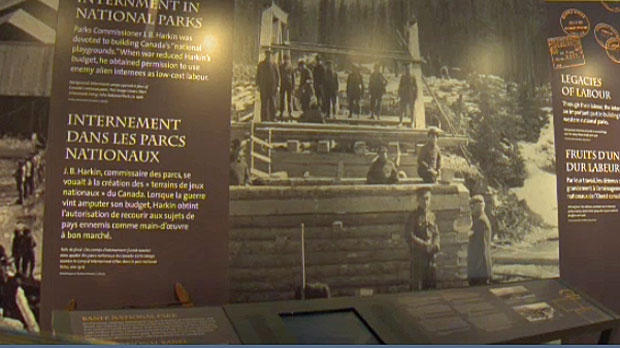 The exhibit opened at the Cave and Basin National Historic Site on Friday, Sept 13, 2013.

A new exhibit at the Cave and Basin in Banff opened to the public on Friday and tells the history of First World War internment operations in Canada.

Minister of Employment and Social Development and Minister for Multiculturalism, Jason Kenney was at the official opening and says the government is committed to acknowledging and educating Canadians about the experiences of those who were interned there.

“We must ensure that we remember these difficult periods in our nation’s history and never forget the communities that were affected by made-in-Canada internment, and how their experiences reflected the character of our country and in turn shaped it,” said Kenney.

There were 24 internment camps spread out across Canada during that time and a number of them were located in or on sites currently administered by Parks Canada.

From 1914 to 1920, more than 8,000 men were interned because they were considered enemy aliens and a threat to Canadian security.

Most were Ukrainians and other Europeans and included civilians, members of enemy militaries and merchant marines.

“It wasn't until recently that we actually found the registration cards of my grandparents and we're probably quite a common family where family members have records and do not understand what they actually have or what they are," said Andrea Malysh from the Internment Recognition Fund.

The government gave Parks Canada about $3.3M to create awareness on the camps at three locations through the National Historical Recognition Program.

The three locations were once used as internment camps and the other two memorials have been erected at Fort Henry, in Kingston, Ontario and the Halifax Citadel, in Halifax, Nova Scotia.