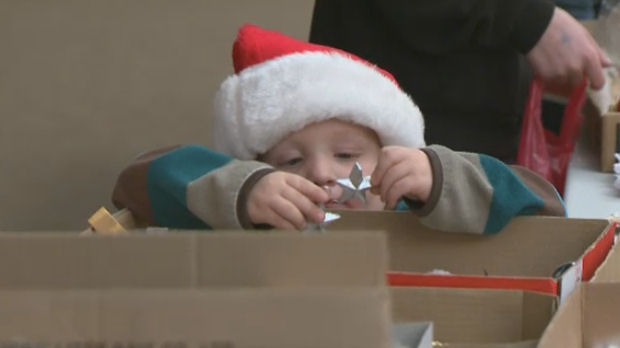 A child picks out Christmas ornaments

Halloween hasn’t even happened yet but for some High River residents Christmas is already on their minds.

It’s all thanks to Project Christmas Hope – the brainchild of David and Heather Meszaros.

The couple’s High River home survived the flood but as they were helping their neighbours muck out the basement it dawned on them. “We saw one of the volunteers trying to hand clean individual Christmas ornaments and we really saw this was going to hit like a hammer come Christmas,” says David.

From that idea, the couple created a Facebook page and made a Youtube video to help spread the word about Project Christmas Hope.

Two months later, they’ve received ornaments from across the country and a few boxes even arrived from the United States.

The ornaments are now on display at the Alliance Church in High River and on Friday night dozens dropped by to help restock their Christmas collection.

“I had a lady that found the same tree topper that she had lost – so it’s amazing to think someone from across Canada donated this tree topper and it was the exact same one she lost,” says Heather.

Project Christmas Hope continues on Saturday from 9am to 5pm.  High River residents can stop by and pick out any free ornaments they want.  There will also be an ornament making station on Saturday so people can create a new memory for this Christmas.