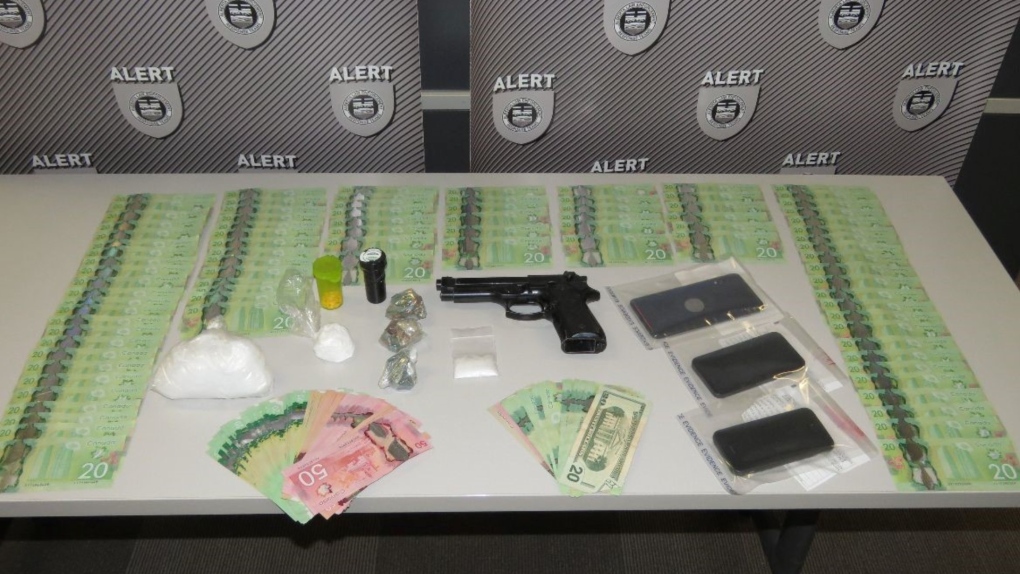 Cash, drugs, cell phones and a gun seized during a targeted Dec. 1 traffic stop outside the city of Brooks. (ALERT)

Arrests have been made following a nearly three-month investigation into the activities of two suspected drug dealers who were believed to be trafficking in Calgary and Medicine Hat.

The investigation, which began in September, culminated in a Dec. 1 targeted traffic stop outside the city of Brooks.

A search of the vehicle and suspects resulted in the seizure of:

According to Alberta Law Enforcement Response Teams (ALERT) officials, the estimated street value of the drugs is $35,000.

"This arrest and subsequent seizure has helped to dismantle the drug network between Calgary and Medicine Hat, and also negatively impacting the communities in between," said Staff Sgt. Ryan Thorburn of ALERT. "Drug trafficking transcends municipal borders and we will continue to work alongside our partner agencies to keep communities safe."

The suspects, 45-year-old Ashley Gackle of Medicine Hat and 30-year-old Amiel Mehaisen of Calgary, were arrested. Gackle was charged with possession for the purpose of trafficking and possession of stolen property under $5,000, while ALERT officials say Mehaisen faces 'similar charges.'

Mehaisen was released from custody ahead of his next court appearance. A bail hearing for Gackle had been scheduled for Tuesday.

A Vancouver Island man is awaiting possible extradition to the United States on charges of sexual assault against his 13-year-old stepdaughter.

A new artificial intelligence algorithm created by a Toronto student is helping researchers search the stars for signs of life.