CALGARY -- Hundreds of students at an Okotoks school spent the day Friday on a bike instead of a classroom, learning how exercise can help mental health.

“In today’s education world, we have a lot of students who suffer from anxiety or depression,” said Steven Kotowich, an outdoor education teacher at Westmount School “We’re trying to tell them when you have those mental blocks, by being active you remove those barriers and have a better outlook.”

Students from grades four to nine each spent 15 minutes riding the stationary bikes, set up in the school’s lobby.

Todd Martin, a cyclist and former solider, led the students through their “rides”.

He is a long term advocate for the Wounded Warriors program, a non-profit group that helps first responders and military members suffering from Post Traumatic Stress Disorder (PTSD).

“Mental health is something we do need to talk about," said Martin. "We want to remove the stigma both for adults and kids.”

“Riding with some fellows that had PTSD, seeing first hand the benefits of their cycling as a method of coping became real for me.” 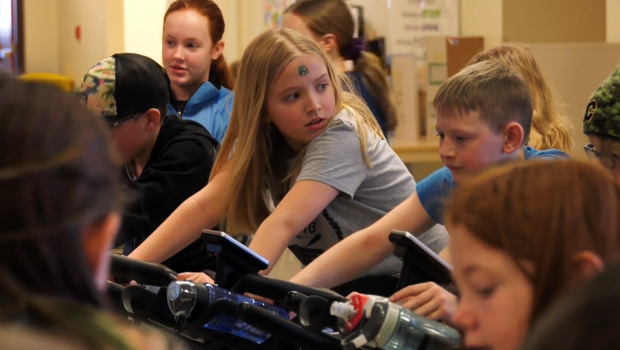 Some teachers also say it seems the more time students spent on their phones and other devices, the more likely it is they will suffer from social anxiety or stress.

“The game changer the last 10-15 year is the amount of technology we have”, said Kotowich “These kids are spending anywhere between eight and 10 hours on devices. They’re losing that ability to communicate."

Organizers also invited firefighters, police officers and paramedics to ride alongside the students for part of the day.