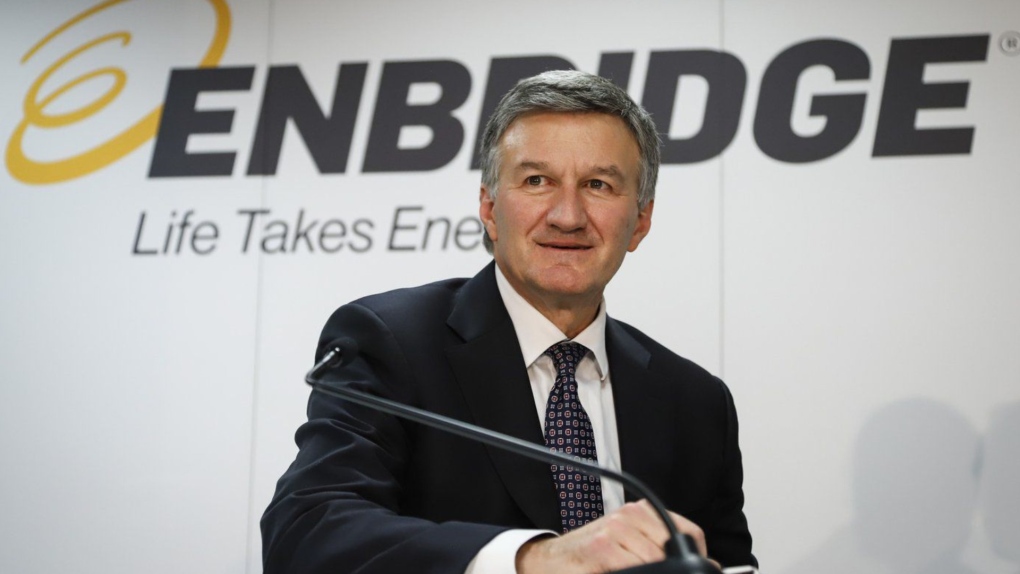 Enbridge president and CEO Al Monaco prepares to address the company's annual meeting in Calgary, Wednesday, May 8, 2019. Monaco may be the outgoing CEO of Canada's largest energy company, but don't ask him to predict the price of oil a decade from now or even next year. (THE CANADIAN PRESS/Jeff McIntosh)
CALGARY -

“Anyone that says they can forecast energy markets is blowing smoke," the 63-year-old chief executive of Enbridge Inc. said in an interview last week.

"This industry is not for the faint of heart.”

But Monaco, who is set to retire Jan. 1 after 10 years at the helm of the company, isn't reticent about when he thinks we'll reach "peak oil" production in this country. He makes it very clear he doesn't believe that day is coming any time soon.

“It’s not in this decade. And it’s questionable if it will be in the next decade," Monaco said.

"It’s hard to see how we (the Canadian oil and gas sector) don’t continue to grow for another decade or two.”

Many in Canada disagree with that perspective. Some environmental groups say Canadian oil production will peak around 2025 due to the increased global focus on climate change and the rapidly accelerating energy transition.

Even the most recent forecast from the Canada Energy Regulator predicts peak oil production in 2032, seven years earlier than its previous forecast. Some observers have criticized even that outlook as being too conservative because it doesn't take into account government policies like the forthcoming cap on greenhouse gas emissions from the oil and gas industry.

But Monaco's tenure as Enbridge's CEO has coincided with a tumultuous period for the energy sector, from the boom-time highs of 2012-14 to the devastating oil price crash of 2014-15 to now the war in Ukraine and its upward pressure on energy prices.

He said he believes the turbulence has brought the industry — and most of society — to some kind of middle ground, where climate progress and energy security can coexist. And that means oil, he said.

"It's not about 'either/or,' " Monaco said. “You’ve got to have energy to meet the economic and societal needs, but you’ve also got to reduce emissions."

During his decade in the CEO's chair, Monaco led Enbridge through a period of unprecedented growth. The company now has a market capitalization of approximately $111 billion, and through its pipeline network moves about 30 per cent of all of North America's crude oil as well as 20 per cent of the natural gas consumed in the U.S.

There was also turmoil. The early years of Monaco's tenure were marked by contentious politics and protests related to large-scale Canadian pipeline projects. Enbridge's own Northern Gateway pipeline proposal was officially rejected by Prime Minister Justin Trudeau's government in November 2016.

Monaco calls Northern Gateway "the best project that we couldn't do." But he says Canada's energy sector emerged from that battle, and those related to other cancelled projects such as TC Energy's Energy East and Keystone XL, stronger and wiser.

"Things became very polarized in that time frame, and I think it was a real wake-up call for the industry in general," he said.

"I think it started an upward shift in our industry. We got better because of the pressure."

That "pressure" forced the oil and gas sector to become more aware of issues like climate change and Indigenous reconciliation, Monaco said. He said the industry is now "genuinely keen" to reduce emissions. In Enbridge's case, of the $100 billion the company has invested in energy infrastructure projects under Monaco's tenure, $10 billion has been in the form of renewables.

These include major investments in solar and wind, but Enbridge has also accelerated its investment in other lower carbon technologies such as renewable natural gas, hydrogen, and carbon capture and storage.

And it has expanded its liquefied natural gas pipeline connections and export capabilities, and made its first investment in liquefaction by acquiring a 30 per cent stake in the Woodfibre LNG project. That facility is to be constructed near Squamish, B.C. and is expected to be complete in 2027.

Unsurprisingly, considering the scale of the company's natural gas assets in North America, Monaco remains bullish on both natural gas and Canada's potential to lead as a global LNG exporter. Enbridge already supplies natural gas to four operating LNG facilities in the Gulf Coast and is poised to supply at least three more.

Environmentalists are critical of Canada's LNG ambitions. They say having even one large-scale LNG export facility in this country (the LNG Canada project near Kitimat, which is expected to be operational in 2025) will make it difficult for Canada to meet its climate goals.

But Monaco is a proponent of the "bridge fuel" argument that natural gas — and by extension, Canadian LNG — can help get other countries off of coal.

He also sees it as an important piece of the energy security equation within the context of the Ukraine war, natural gas shortages in Europe, and rising energy costs for consumers everywhere.

Ultimately Monaco said Enbridge views itself as the "quintessential poster child" for an "orderly" energy transition. One of his proudest accomplishments as CEO has been shifting the company's asset mix toward a greater proportion of renewables and lower-carbon energy sources — but he also believes change takes time.

That's why Monaco — who will be staying with Enbridge in an advisory capacity until March 1 to help the company transition to the leadership of his replacement Greg Abel — is confident oil isn't going anywhere any time soon.

"We have to come to the realization and embrace the fact that all of those sources of energy are going to be required, and at the same time we’re going to reduce our emissions with the end goal of reaching net-zero emissions by 2050 — with the understanding it will take time to get there."

Russians gone from Ukrainian village, but fear and hardship remain

It has been more than 11 weeks since Ukrainian forces wrested back the village of Kalynivske, in Kherson province, from Russian occupation. But liberation has not diminished the hardship for residents, both those returning home and the ones who never left.

A ceremony will be held this evening to mark the sixth anniversary of Quebec City's deadly mosque shooting. Prime Minister Justin Trudeau, several senior federal cabinet ministers and Quebec Premier Francois Legault are among those expected to attend.