New Hampshire native Ryan St. Lawrence’s western Canadian bike trip took a turn for the worse this weekend, when his adaptive bike was stolen, along with a friend’s mountain bike.

St. Lawrence is a parapalegic and the bike is specially designed so that only he can ride it. A second bike, his friend’s was stolen some time in the last 24 hours from a rack on his vehicle in the lot of the Hilton Garden Inn, at the airport.

St. Lawrence was injured in a mountain biking accident three years ago, but never gave up his passion for biking.

The stolen adaptive bike was custom built a year after St. Lawrence's accident.

"That bike is not replaceable," Lawrence said. "It was a 100% custom build that cannot be duplicated."

A third bike, also an adaptive bicycle, which was locked onto the front of the vehicle, wasn’t stolen.

St. Lawrence called police and reported the theft, but also hopes to reach out to the public in the hope that someone may have information about their whereabouts.

After he discovered that two of his bikes were stolen, he asked the hotel for any video surveillance footage of the parking lot that they might have, but they didn’t have any. 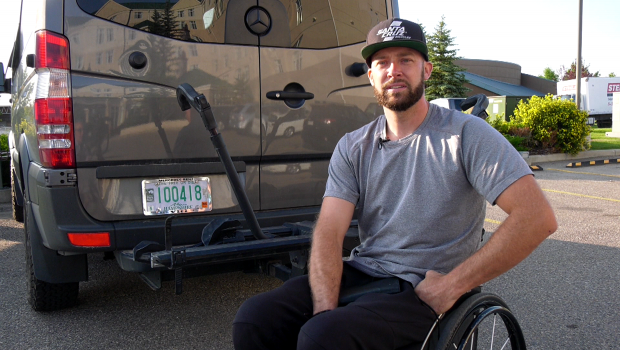 St. Lawrence said the experience left him a little stunned.

"A big time bummer moment," he said. "I've had nothing but good times so far in Canada. Everyone has been super nice.

Anyone with information  is asked to contact the Calgary Police.