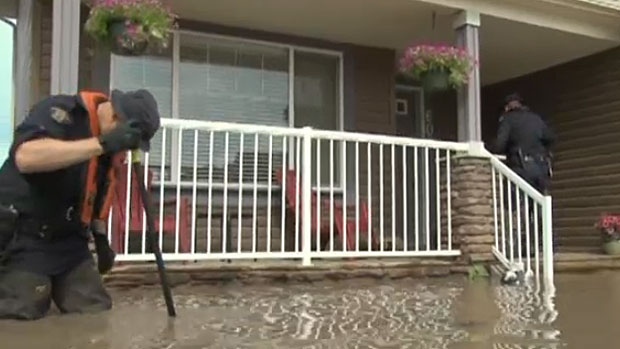 The residents of High River whose homes were damaged during searches by the RCMP will be compensated from the province's disaster relief program.

The Town of High River, the province, and the RCMP now have a plan in place to compensate the residents of the community who suffered damage to their home during a search after June’s flooding.

As the flood waters forced the evacuation of the community south of Calgary, RCMP members forced entry into locked homes, kicking down doors and breaking windows to search them.

Now, residents will be compensated for the damage to their homes, with the repair money coming from the province’s disaster recovery program.

In order to receive funding, a claim must be submitted to the RCMP along with photographic evidence of the damage.

Once that’s done, it would be up to town administration to process the payment as quickly as possible.

Wildrose leader Danielle Smith, who headed a town hall meeting with residents to discuss the issue, said in a statement on Thursday that she is relieved her constituents are being compensated.

“I’m also satisfied to see the Alberta government – after dismissing my constituents’ claims and casting doubt over the extent of the damage – has finally acknowledged what happened and is committing to compensation. I’m gratified that the compensation portion of this has been solved. It’s time for us to move on and focus on the bigger issue, which is making sure the Disaster Recovery Program starts working."

Smith says she wants the Premier to now turn her attention to fixing the Disaster Relief Program, saying that there are homeowners in Medicine Hat who are still waiting for repair funds for floods that occurred in 2010 and 2011.

The RCMP says they conducted the searches to ensure everyone made it out of the town safely and all dangerous items were secured.

Staff Sergeant Ian Shardlow said during a meeting in early September that members did their best to minimize the damage done to homes.

More than 1,900 residents have submitted claims.