A southern Alberta woman is attempting to raise awareness to the rights owners of service dogs have after she was asked to leave a farmers' market in Nanton, Alta. over the weekend.

Julie Letal said her service dog Chance was wearing a marked vest and collar and she provided her Alberta service dog ID, but was told dogs were not allowed, no matter what.

Letal, a 20-year veteran of the RCMP, says Chance helps her cope with an invisible disability, post-traumatic stress disorder (PTSD).

"She’s my lifeline," explained Letal, who is currently on medical leave. 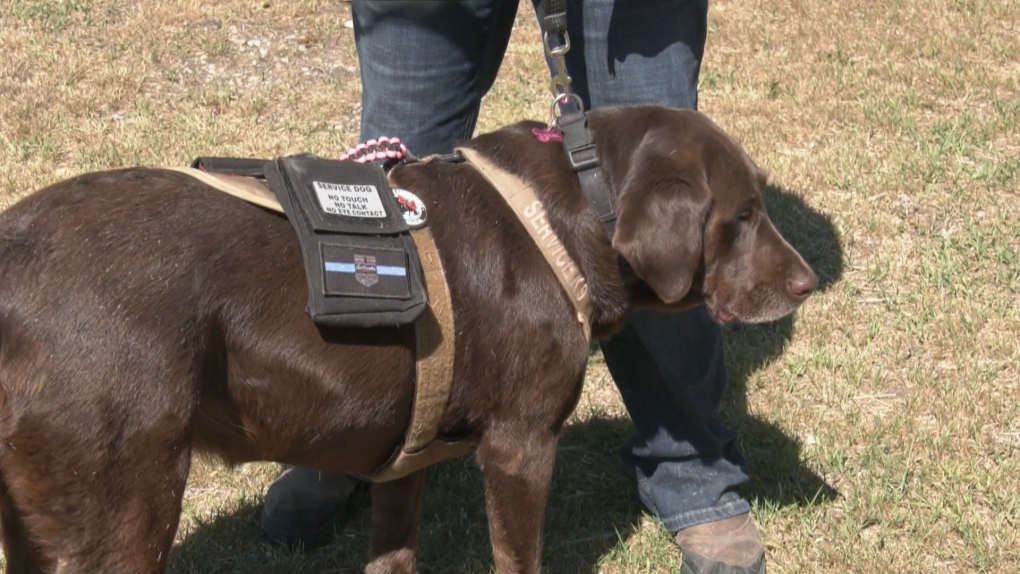 Chance, the service dog for a 20-year veteran of the RCMP, was not permitted into the farmers' market in Nanton, Alta.

She said she developed PTSD after the loss of four of her colleagues in the Mayerthorpe shooting tragedy of 2005, as well as other difficult encounters she faced while serving as a member of the RCMP highway patrol.

"I’ve seen a lot of things that most humans run away from, and over the years it has accumulated."

She says she has had nightmares, panic attacks and anxiety as a result.

According to Letal, her service dog has been trained to help with anxiety and depression by picking up on Letal's emotions and providing relief that enables her to get through the day.

She described the experience at the Nanton farmers' market as both embarrassing and "very upsetting."

In Alberta, qualified service dogs and guide dogs are allowed to go anywhere the public is allowed including restaurants, hotels, stores, movie theatres, hospitals, pet-restricted apartments or condos, golf courses, places of worship, taxis and all other public areas.

Anyone discriminating against a person with a qualified service dog could be subject to a fine of up to $3,000.

Letal said she tried to explain that to the man who confronted her at the farmers' market, but he kept insisting that dogs were not allowed.

Jen Handley, Nanton's mayor, said she was sickened to learn of the incident and has assured Letal that steps were being taken to ensure this doesn't happen to anyone else.

"It happened," said Handley. "Now is an opportunity to make it right.

"When we know better, we can do better."

Handley said the first thing she did was educate herself about service dogs. The mayor also reached out to the Nanton Chamber of Commerce and the towns Quality of Life Foundation that provides social services in Nanton.

According to Handley, the three groups will be working together to provide seminars and put together education packages for local businesses and community organizations.

Handley also posted on her mayor's page on Facebook, and said the response has been positive, with people offering to share resources and information.

"I can already see the community coming together to make this right."

Letal said she appreciated Handley's quick and thoughtful response, adding her goal is simply to raise awareness about the importance of qualified service dogs, and the rights they are afforded in Alberta.

"I want to be on the education side, instead of the lawsuits and tickets," said Letal. "I just want people to be aware that service dogs can go places where other dogs can’t go."

Letal is encouraging people to learn more about medical service dogs, by checking out the website for Courageous Companions, a registered charity that provides trained certified service dogs to military veterans and first responders.