For the seventh time in the last 16 years, snowflakes fell in Calgary during the Victoria Day long weekend.

CTV Calgary meteorologist David Spence says the much-needed precipitation is unlikely to jeopardize the health of plants and trees. Temperatures remains near the freezing mark in Calgary and the moisture will protect vegetation should conditions fall below zero degrees Celsius.

As of 6:00 p.m., snowfall warnings remain in place for the following regions: 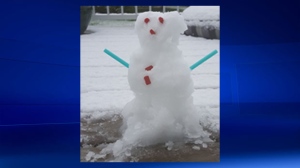