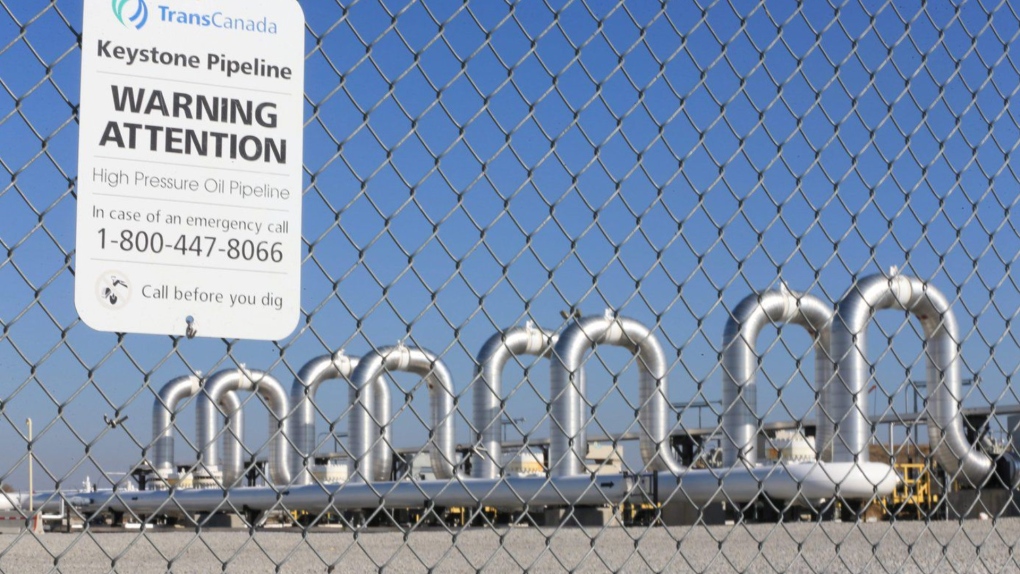 In this Nov. 3, 2015 file photo, the Keystone Steele City pumping station is seen in Steele City, Neb. TC Energy Corp. says it has shut down its Keystone pipeline after a leak in Nebraska. The company says it has mobilized people and equipment in response to a confirmed release of oil into a creek, about 32 kilometres south of Steele City, Neb.(THE CANADIAN PRESS/AP/Nati Harnik)
CALGARY -

The size and scope of the oil spill caused by the Keystone pipeline Wednesday remains unknown, but analysts say Canadian crude could suffer a significant price impact if the pipeline is shut down for more than a few days.

Pipeline operator TC Energy Corp. said Wednesday evening that it had mobilized people and equipment in response to a confirmed release of oil into a creek in Washington County, Kan., about 32 kilometres south of Steele City, Neb.

The system remained shut down Thursday morning, as crews respond and work to contain and recover the oil that was spilled.

TC Energy has not indicated how much oil was spilled, or how long the pipeline system is expected to be down.

h ceeIt said the affected segment of the pipeline has been isolated and booms have been deployed to prevent the leaked oil from moving downstream.

But analysts say any prolonged shutdown would be problematic, because oil from Western Canada has already been trading at a significant discount to global prices so far this season.

On Thursday, for example, the differential between Western Canada Select and the U.S. benchmark West Texas Intermediate was about US$29 per barrel (a US$15 spread is more typical).

The difference in price in 2022 between U.S. and Canadian oil has not been because of a lack of pipeline access but more due to a series of refinery outages in the U.S. Midwest, which have lessened the ability for operating refineries to take on excess barrels of Canadian heavy crude.

However, experts say a Keystone shutdown of more than a few days would quickly start to impact transport of Canadian oil both to the U.S. storage hub in Cushing, Okla. and to refiners along the U.S. Gulf Coast. The resulting glut would force Canadian oil producers to begin selling barrels at an increased discount.

“If this lasts a long time, and you begin to have egress constraints again, that starts nudging the differential open,” said Rory Johnston, an oil markets analyst and founder of the Commodity Context newsletter.

“It's not a great situation for Canadian crude shippers, and particularly producers of Canadian heavy oil, at this particular moment.”

There have been a handful of spills along the pipeline's route in recent years, the most significant of which were in November 2017 and October 2019.

Vijay Muralidharan, energy analyst and managing director with R Cube Consulting Inc., said the 2017 spill in particular was a problem for Canada. In the 10 days that the pipeline was shut down, WTI prices jumped and Canada's WCS fell sharply, taking a bite out of the Canadian energy sector's profits.

However, the 2017 spill also came at a time when Canada had significantly less pipeline space. The addition of Enbridge's Line 3 replacement project, which came online in 2021, has added significant capacity.

“Because (traders) don't know how long (Keystone) is going to be shut, it's pretty mild,” Muralidharan said, adding the price of WTI jumped immediately after news of the spill broke but has since settled.

But he said 10 days is about the longest the pipeline can be shut down before a significant market impact.

“If the news gets out that it's going to be shut for longer, you're going to see panic and pandemonium on the markets.”

Johnston said his “base case estimate” is that Keystone could be down for two weeks.

“That said, it's very, very hard to tell early on how much of an issue this is going to be,” Johnston said. “A lot of the leak is sub-surface, the ground is frozen ... It's going to be a little while until we know the full extent.”

Wednesday's spill has also provided ammunition for environmental activists south of the border. In a statement, Catherine Collentine of the Sierra Club referred to a “toxic” spill from the Keystone pipeline and used the negative term “tar sands” to describe Canada's oil producing region of northern Alberta.

“This is not the first time this pipeline has spilled and unfortunately we know all too well that it won't be the last,” Collentine said. “There is no such thing as a safe tar sands pipeline.”

Fears about potential pipeline leaks - as well as concerns about climate change - helped stoke opposition south of the border to TC Energy's proposed Keystone XL project, which would have cut across Montana, South Dakota and Nebraska.

U.S. president Joe Biden cancelled the permit for that project immediately after his inauguration, and TC Energy formally pulled the plug on it in June 2021.

This report by The Canadian Press was first published Dec. 8, 2022.

This version has been corrected to indicate the leak occurred in Kansas, not Nebraska.