Too little, too late: Alberta doctors react to new COVID-19 measures, call for more to stop it

Alberta doctors are imploring the province to take the pandemic more seriously in the wake of new restrictions and are calling out Premier Kenney for his claims that the COVID-19 virus was "not predictable."

“This false,” said family physician Dr. David Keegan who is part of a group of physicians, scientists and advocates known as Protect Our Province Alberta.

“Scientists projected the exact scenario that we are in right now and the government ignored them.”

Keegan made the remarks during an emergency update meeting held Wednesday evening following the province’s announcement of new restrictions that include an option for businesses to restrict their clientele to Albertans who are fully vaccinated.

Many experts on the panel say the information is a lot to take in and that the province should have known better and trusted their forecasting of the virus.

“Jason Kenney has demonstrated himself to be a skilled contortionist, bending himself virtually into a pretzel in order to appease a small fringe but vocal group of individuals who are opposed to vaccination,” said Edmonton infectious disease physician, Dr. Ilan Schwartz.

“As a result, we’re left with a hodgepodge of measures that are confusing, and consequently, they're likely ineffectual.”

Kenney implemented a restriction exemption program, otherwise known as a vaccine passport system, which would allow businesses to operate as normal.

He went on to say that this is a "crisis of the unvaccinated"’ but some infectious disease experts like Dr. Gosia Gasperowicz believe a vaccine passport system won’t work on its own to increase vaccination efforts.

“It absolutely must be accompanied by a widespread, wide reaching vaccine campaign to address the enormous equity issues around vaccination,” she said.

“We need outreach teams deployed to areas with low vaccination rates and high mistrust of the vaccine, and we need experts working with trusted community leaders in those areas.”

Gasperowitcz worries that the additional measures might not be strong enough to bend the curve immediately.

Dr. Neeja Bakshi, a frontline COVID-19 physician, added that the public health measures are likely not enough and will soon force doctors into implementing triage care, which means tough decisions need to be made on who gets treatment first.

“Our health care system is in dire straits. We are in positions that none of us have ever been in before.”

Meanwhile, some physicians are now imploring Albertans to do their part and change their behaviour in an effort to save lives.

“We're going to need Albertans to help us, so we can help them,” said ER doctor Paul Parks.

“If Albertans don't pitch in and if they don't work together and continue good behaviors or change their behaviours, then thousands of Albertans are going to needlessly suffer and many will die.”

DAYS AWAY FROM FULL ICU CAPACITY

New modelling data obtained from the Alberta NDP from several doctors suggests that Alberta could see a full ICU capacity within the next few days.

This chart, obtained by CTV News through the Opposition Thursday morning, suggests that Alberta’s 327 ICU beds are likely to hit full capacity by Sept. 27, but that is only assuming current non-COVID patient numbers stay flat. 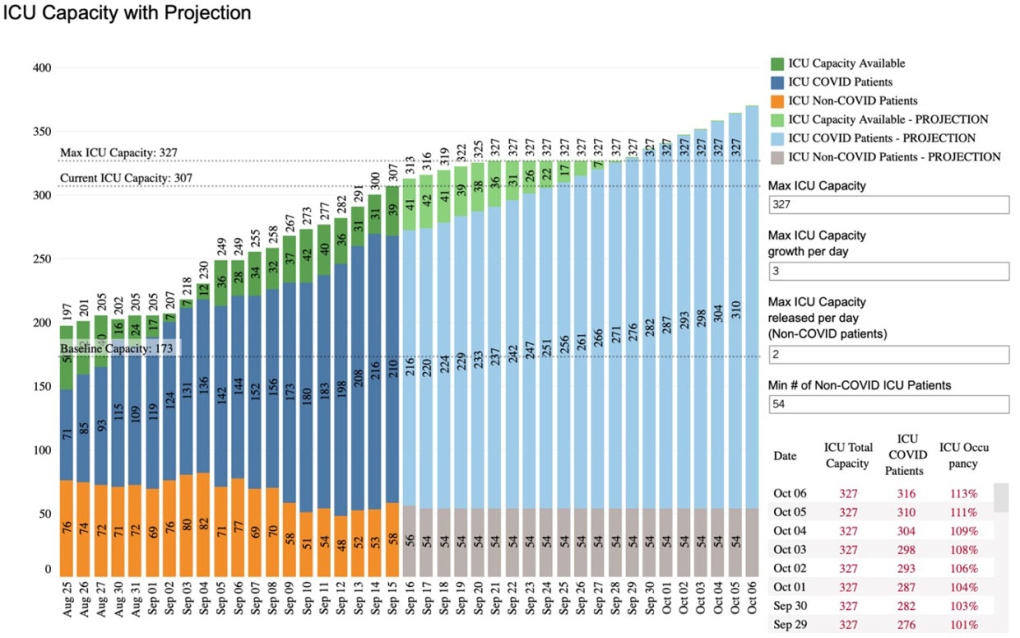 Alberta NDP Leader Rachel Notley will be speaking further on this issue Thursday at a 1:30 p.m. press conference outside the Rocky View General Hospital.

In the meantime, Kenney admits that Alberta could be just 10 days away from reaching full capacity for intensive care beds across the province.

As of Tuesday, there were 270 patients in intensive care, marking the highest number of ICU patients the province has ever seen according to Alberta Health Services CEO, Verna Yiu.

“We are facing our greatest challenges as a provincial healthcare organization at a time when most of us had hopes that this pandemic would be close to over,” she said.

This means Alberta is now looking outside of the province for ICU beds and additional staff.

CTV News has reached out to the health ministries of British Columbia, Saskatchewan, Manitoba to see if those provinces have ICU capacity to spare.

Ontario’s Ministry of Health has provided the following statement to CTV News, but couldn’t elaborate on further details at this time.

“Our officials are currently looking into what support we might be able to offer Alberta.”

At this time, AHS is preparing to implement triage protocols as a last resort.

It has been described by Yiu as a planned and predetermined province-wide approach to guide the response should demand for care surpass medical resources that are available.