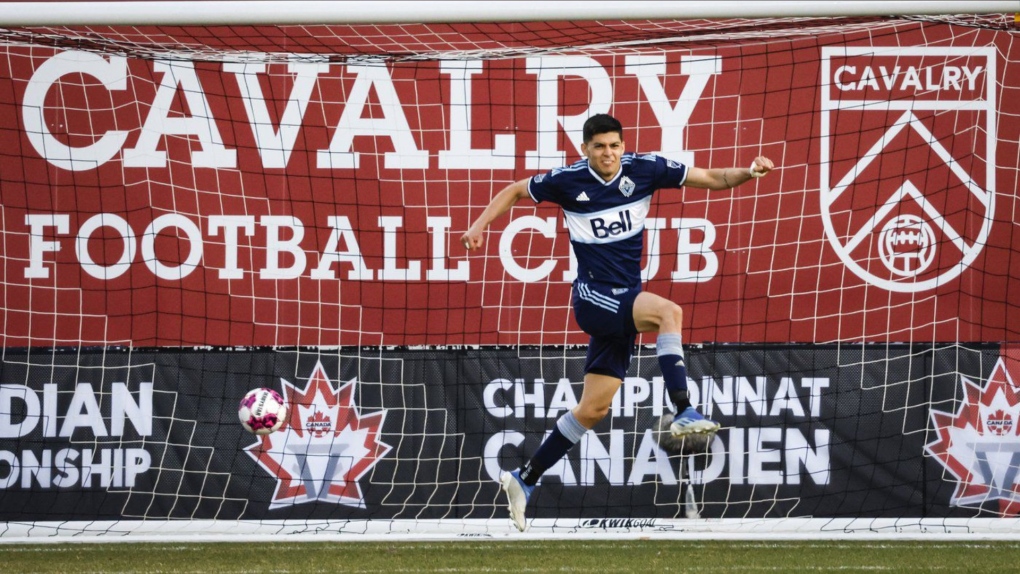 Vancouver Whitecaps defender Cristian Gutierrez celebrates his game-winning goal in a shoot out over the Calgary Cavalry during soccer action in the Canadian Championship quarter-finals in Calgary, Alta., Wednesday, May 25, 2022.(THE CANADIAN PRESS/Jeff McIntosh)
CALGARY -

The Vancouver Whitecaps answered a late wakeup call and stopped history from repeating itself Wednesday night.

Cristian Gutierrez scored on a penalty kick to give the Major League Soccer Whitecaps a win over Cavalry FC of the Canadian Premier League in an exciting quarterfinal match of the Canadian Championship at ATCO Field.

The game was tied 1-1 in regulation and Vancouver won 5-3 in penalty kicks.

Gutierrez’s goal came after Vancouver goalkeeper Cody Cropper made a diving save to stop a shot from Cavalry’s Ali Musse.

"In the grand scheme of things we had more chances to score so probably we deserved to win," said Vancouver coach Vanni Sartini. "Cavalry put up a fantastic fight and if they would have won, they would have deserved it."

Mayer Bevan gave Cavalry a 1-0 led in the 72nd minute with a rocket of a shot from distance that went over Cropper's fingertips.

Vancouver's Erik Godoy tied the match in the 85th minute, heading in a corner kick from Deiber Caicedo.

After controlling much of the opening half the Whitecaps struggled in the second.

"We weren’t finding the space and we didn’t create any problems for Calgary until they created the problem scoring that fantastic goal," said Sartini.

"It woke us up. We had chances again and we scored. At the end, in penalties, it could go one way or the other.'

With the scored tied after regulation the game went directly to penalty shots.

The win helped exorcise some ghosts for the Whitecaps.

During the 2019 Canadian Championship, Cavalry upset the Whitecaps with a 2-1 aggregate win, the first victory for a CPL team over an MLS opponent.

Bevan, Jose Escalante and Elliot Simmons scored for Calvary before Musse was stopped.

Cropper joined the team Wednesday morning after coming off COVID-19 protocol. He praised goalkeeper coach Youssef Dahha for helping him prepare for the shootout.

"Statistically speaking, guys go to certain sides," he said. "We were working together to try and go the right way each time. Fortunately, on the fourth one, it went our way."

The Whitecaps showed how seriously they were taking the match with a starting lineup that featured MLS veterans like Cavallini, midfielders Russell Teibert and  Ryan Gauld and defenders Erik Godoy and Javain Brown.

The teams were tied 0-0 after the first half despite the Whitecaps holding an advantage of play. The Whitecaps led 9-3 in shots and held a 2-0 advantage in shots on goal.

Cavallini, one of the players being considered for Canada’s World Cup team, had a pair of great scoring chances. Early in the half he headed a pass from Gutierrez that Cavalry goalkeeper Marco Carducci stopped. Later, Cavallini was left open in front of the net but a Cavalry defender was able to get his foot on the shot, sending it over the net.

Late in the opening half Gauld sent a shot just wide of the corner of the net.

Cavalry threatened early in the second half off a corner kick. Daan Klomp took the ball and fired a shot through a maze of players that Cropper grabbed.

In the 69th minute Cavalry's Victor Loturi fired a left-footed shot over top of the Vancouver net.

It was a physical match with both teams dealing out some heavy tackles. Teibert left the match early in the second half have being hit in the face by the ball with just a few minutes left in the opening half.

The Whitecaps lost 2-1 to Charlotte Sunday and currently sit at the bottom of the Major League Soccer Western Conference standings with a 3-7-2 record.

Cavalry came into the game unbeaten in its last four CPL appearances (3-0-1) and sitting second in the league standings with a 3-2-2 record.

This report by The Canadian Press was first published May 25, 2022.