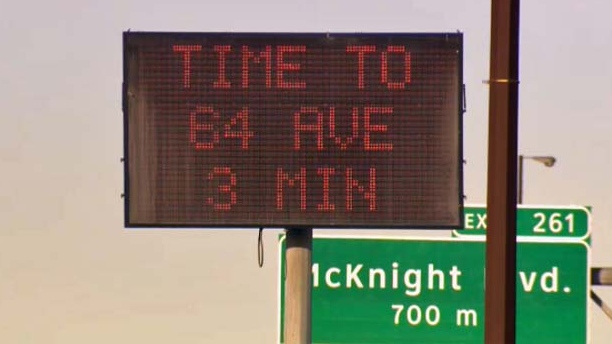 The system utilizes sensors on both sides of the road and cost about $400,000.

The city is now using the data collected from Bluetooth devices to estimate the travel times between points on Deerfoot Trail.

The system collects the publicly available data from Bluetooths to estimate the travel time and congestion between points along those roads and displays the information on overhead message boards to motorists.

“Now we can deliver accurate information about travel times directly to drivers during their commute,” says Gord Elenko, Manager of The City of Calgary’s Roads Traffic division. “Drivers will be able to make informed route planning choices in real time. We believe it will eventually help reduce congestion and decrease driver frustration.”

The system utilizes 15 sensors and seven permanent message boards from Airport Trail in the north to Anderson Road in the south.

“Bluetooth sensors are new in the traffic industry, it’s been out for maybe a few years. We’re one of the very first municipalities to implement this in Canada,” said Michael Gray, Advanced Traffic Management Systems Engineer.

Stray signals from drivers and pedestrians near the Deerfoot will be filtered out.

“We’ve got algorithms to filter this stuff out so that a person walking doesn’t get estimated in that calculation,” said Gray.

The city says that the technology encrypts and monitors Bluetooth signals without tracking other information about the traveler to minimize the impact to the person’s privacy.

“We have a list of the MAC addresses but we have no idea who they belong to. There’s no central data base to actually figure out who they are. It’s all about getting travel times,” said Gray.

The Travel Time Information System will be expanded in the future to include sections of Crowchild Trail and Glenmore Trail in the southwest.

The system will initially operate from 6:30 a.m. to 6:30 p.m., Monday to Friday, so the city can test and monitor it during peak travel times.

Those hours will also be expanded once the reliability of the system is assessed.