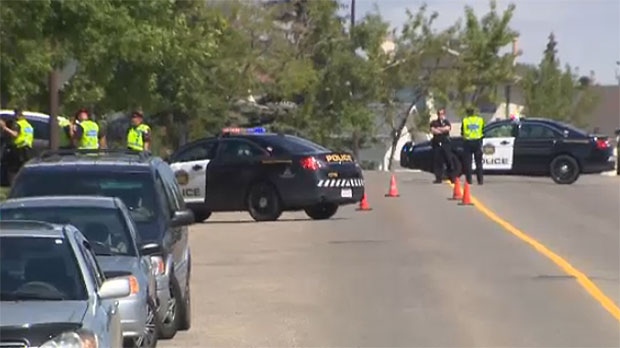 Police closed off a street in Hawkwood after a woman was hit by a vehicle on July 28, 2016.

Emergency crews were called to a serious collision in the northwest on Thursday morning that sent a woman to hospital with critical injuries.

Crews responded to Hawkwood Drive N.W., just north of Hawkwood Blvd, at about 10:15 a.m. and found a woman who had been hit by a vehicle.

Police say a woman was backing her Honda CRV out of her driveway on Hawkwood Drive when she hit the pedestrian.

“The driver stopped right away and assisted the pedestrian that was on the ground,” said CPS Sergeant Daran Wood. “It’s a residential road, there’s a lot of houses lining the roadway itself and every single one of the houses you actually have to cross a sidewalk in order to exit your driveway.”

The injured woman was taken to Foothills Medical Centre with a head injury in life threatening condition.

Investigators say the victim was walking her dog when she was struck by the vehicle and that the dog took off after the crash. A search is being conducted for the missing dog.

“The indication that we have from people at the scene is, once the collision happened, the dog took off and we’re still looking for it,” said Wood.

No one else was injured in the incident and there is no word if any charges will be laid.