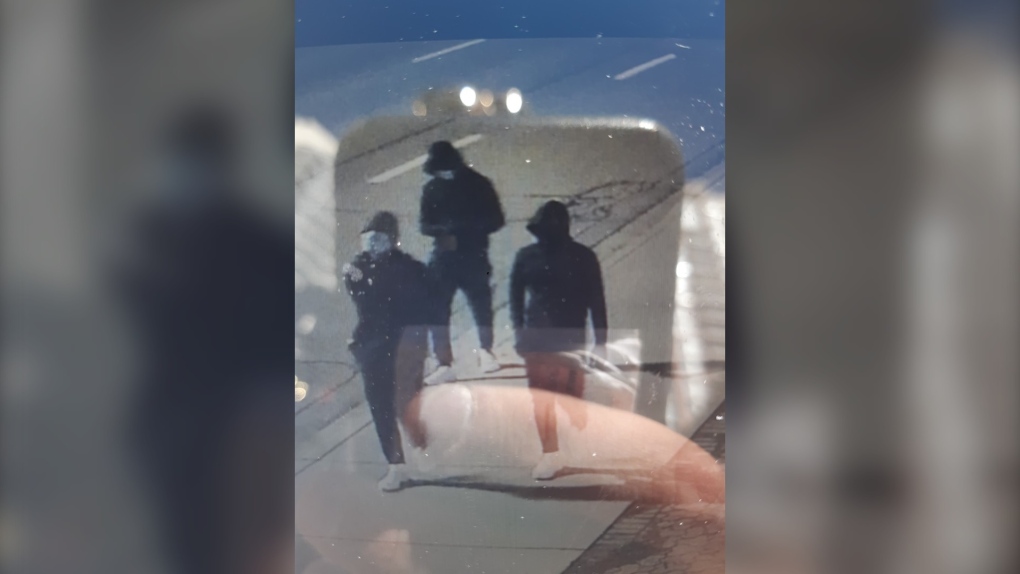 These three individuals are being sought by police in connection with an incident of vandalism at the Chinese consulate building in Calgary. (Supplied)

CALGARY -- Members of the city's Chinese community say they are working with authorities after a building in downtown Calgary was defaced with a hateful message.

The message was found on one of the outer walls of the office of the consulate general of the People's Republic of China in Calgary Wednesday.

The office says it has engaged RCMP to conduct an investigation and has security footage of the incident that will be handed over to help track down who did it.

A spokesperson, in an email to CTV News, said the graffiti's message is an "action of hatred."

Tang said the office implores authorities to do all they can to solve the case and protect the safety of the consulate, its staff and properties.

Calgary police say they are investigating the incident as a possible hate crime and are actively looking for three individuals who were caught on camera spray-painting the building.

Investigators say the group approached the building at 3:30 a.m. on May 27 and wrote a number of phrases that referenced the COVID-19 pandemic and left.

Officials say it's the second time in a week that the building's been targeted.

In the first incident, a message was spray-painted on the sidewalk in front of the building on May 19. That phrase, however, did not contain any reference to COVID-19.

Craig Collins with the CPS Hate Crime Unit says people are allowed to hold political views, but there is a line that should not be crossed.

"When people are targeting others for ill treatment or committing crimes because of those views, we have a duty to get involved," he said in a release.

Only a slight increase in incidents

While police did investigate some incidents that targeted the Chinese community and those of Asian descent in Calgary early in the pandemic, there has only been a slight increase since that time.

Collins says they are monitoring the situation closely.

"We are hearing from the Chinese community that they are concerned about growing hostility."

Anyone with information about this or other hate incidents is asked to contact Calgary police by calling 403-266-1234. Tips can also be submitted anonymously by contacting Crime Stoppers through any of the following methods: