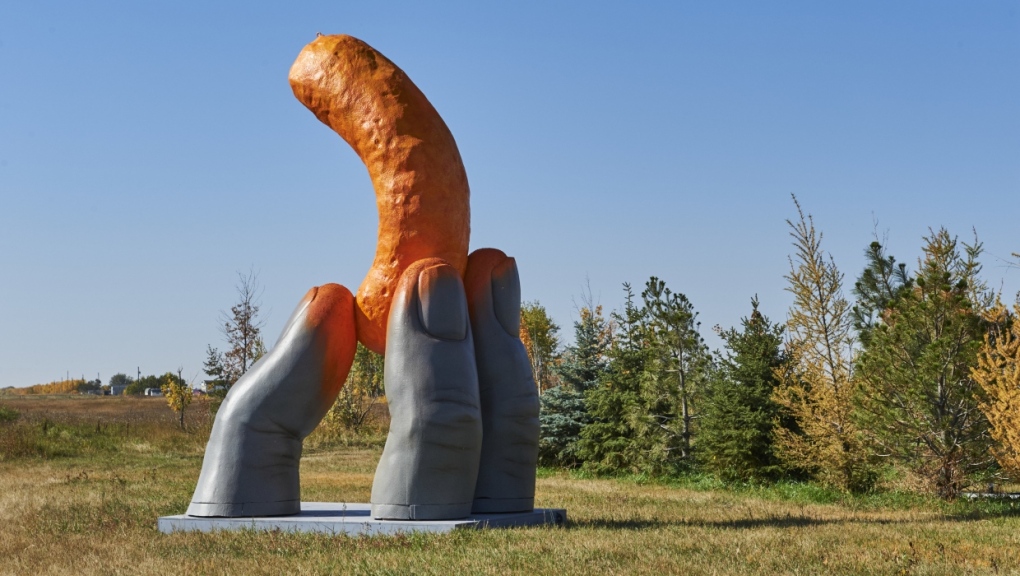 The monument, which is almost 5.2 metres tall (17'), shows a thumb and two fingers holding a Cheetos Puffs snack in the air.

The fingers are covered in the Cheeto's orange dust – which Cheetos says is officially called  'Cheetle.'

"Cheadle is proud to be home to the Cheetle Hand Statue. Where else could the Cheetos brand honour the iconic Cheetle, if not here?" said Cheadle Community Club president James Gosteli in a news release.

But the statue won't stick around forever.

Canadians only have until Nov. 4 to visit the Cheetle Hand Statue, which sits at 400 Railway Ave.

"While our residents will be the first to see the unique monument, we can't wait for the rest of Canada to see it for themselves," Gosteli said.

Cheetos is a Canadian snack brand under the Frito-Lay Canada portfolio, which is owned by PepsiCo Foods Canada.

"We're excited to be celebrating Cheetle and Canadians' cheesy, Cheetle-dusted fingertips on such a grand scale and in such a uniquely mischievous way," PepsiCo Foods Canada spokesperson Lisa Allie.

"Large, unconventional monuments have been popping up around the world for years, and now Cheetos is making its orange mark in Cheadle, Alberta."

While not food-themed, some of Alberta's other notable roadside attractions include a Starship Enterprise replica in Vulcan, a giant wind gauge in Lethbridge, a giant teepee in Medicine Hat, a fishing lure in Lacombe, a baseball glove in Heisler, a softball in Chauvin, a dinosaur in Drumheller and a giant Easter egg in Vegreville.

The hamlet of Cheadle is located in Wheatland County, about 35 kilometers east of Calgary.

CTV's W5 has been shown never-before-seen surveillance footage of Punta Cana International Airport from the night before a Canadian airline crew was detained after discovering duffle bags stuffed with 210 kilograms of cocaine in their plane's avionics bay.

Canadian tourists may not be able to claim trip cancellations to Jamaica amid violence on island, travel expert warns

Despite Jamaica’s prime minister recently declaring a widespread state of emergency following a surge in gang violence and murder on the island, a travel expert warns that Canadian travellers may not be granted cancellation claims for travel insurance policies.