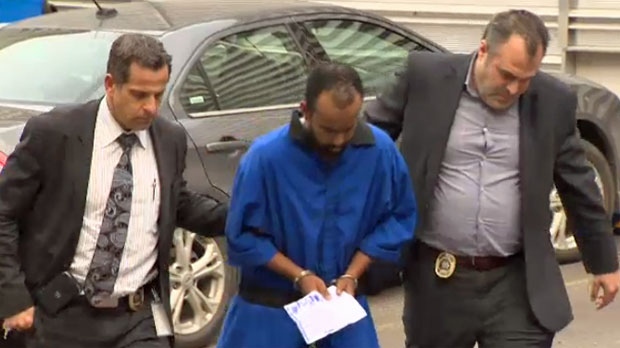 Calgarian Emanuel Kahsai is accused of first-degree murder in the deaths of his mother and the young disabled woman she cared for. (file)

Emanuel Kahsai has been denied a second trial after being found guilty in 2018 of two counts of first-degree murder while representing himself in court but without access to the courtroom due to his erratic behaviour.

Kahsai was sentenced to prison with no parole for 50 years in connection with the 2015 stabbing deaths of his mother, 54-year-old Selma Alem, as well as one of Alem's wards, 25-year-old Julie Tran who was developmentally delayed due to fetal alcohol spectrum disorder, at Alem's home in the northeast community of Coventry Hills.

During the trial, Kahsai was barred from the courtroom by the judge and made to participate remotely via closed circuit television as a result of his unpredictable, disruptive and erratic actions. Additional outbursts prompted the judge to cut Kahsai's video and later his audio feed.

In its decision, which was made in October 2020 but not released until Thursday, the Court of Appeal of Alberta denied the appeal request by a 2-1 decision with the lone dissident stating the presiding judge should have imposed, against Kahsai's wishes, either a defence counsel or partisan amicus with defence-counsel powers to represent him in court.

Prior to the original trial, a psychiatrist deemed Kahsai as fit to stand trial.

The original version of this story, including the headline, indicated Kahsai had been successful in his appeal request. His appeal was denied 2-1.