Murwarid Ziayee can’t go more than a few hours without tears streaming down her face as she worries about the safety of her family and friends back home in Afghanistan.

“I’m broken and the past three weeks have been the hardest time of my entire life,” she said.

“I had lived in Afghanistan all my life, including when the Taliban took over the country in 1996 so I'm scared more this time for the generation that haven't seen the Taliban, they haven't faced Taliban restrictions and the inhuman behavior, especially for women.”

Ziayee immigrated to Calgary in 2018, but has been making every effort possible to help her family get out the country ever since.

She is unable to identify them for fears of their safety, but says she is outraged by what has happened in the country and the lack of action from the Canadian government.

“I think the Government of Canada moved really late, and not only late, but very slow,” she said.

“The evacuation seemed to have failed from the Canadian side. Trudeau said, 20,000 refugees and how many they could evacuate was only 3,000, it's just nothing compared to what other countries took. They should have acted immediately, and they should provide safe passage for those who are still in the country and have all the documentation or their top documents in the process to leave the country.”

Calgary-based non-profit, Canadian Women for Women in Afghanistan (CWFWAfghan) is continuing to do its part in bringing Afghans to Canada, but efforts have remained at a stand-still.

Executive director Lauryn Oates, says evacuation and resettlement is her main focus, adding that Qatar is likely to take control of the Kabul airport and that it may be possible for commercial airlines to resume service.

“In the meantime, people have been trying to find other means of leaving the country,” Oates said.

“So mainly by land borders, which are mainly closed actually, with all the surrounding countries, except for one border in southern Afghanistan with Pakistan. But many of the people who want to leave don't have passports, they don't have visas, so there's a lot of smuggling going on.”

Oates adds that Canada’s process of helping Afghans evacuate has been very slow.

“Other countries were quick to forge partnerships with bordering countries further ahead like Ukraine, Albania and Uganda to move people temporarily, where they can at least be in safety, while the government takes their time to process people's paperwork,” she said.

“So I'm worried Canada is going to be the last out the gate and there won't be many options left to figure out how to move people out.”

Immigration, Refugees and Citizenship Canada (IRCC), confirmed to CTV News in a statement that Canada is firmly committed to helping evacuate as many people from Afghanistan as long as it was safe to do so.

However, the evacuation process ended on Aug. 26 because of the grave conditions on the ground.

“All applicants under our special immigration measures continue to remain eligible, whether they are in Afghanistan or not,” the statement read.

“We continue to process applications under the special immigration program for Afghans who have contributed to Canada’s efforts in Afghanistan, and their families. This is not affected by the closing of the embassy in Kabul or the end of the air bridge.”

IRCC adds that it recognizes there are still many applicants who have been unable to travel to Canada under the special immigration program, but says individuals must assess their security and take necessary steps to protect their families.

Canada’s Department of National Defence (DND) was also contacted for this story.

Daniel Le Bouthillier, the DND’s head of media relations, says military personnel did everything they could to facilitate the entry of as many people as possible through the perimeter, into the Kabul airport and onto aircraft, while risking their own safety.

“As we have said before, the conditions on the ground were tenuous, chaotic and separate, and the situation was constantly changing with significant and dynamic threats,” Le Bouthillier said.

“Working closely with IRCC and (Global Affairs Canada), our (Canadian Armed Forces) teams were given a master list of vetted and vulnerable individuals that it worked to load onto flights.”

Le Bouthillier was not able to explain how that so-called master list was made, what constituted the vetting process, and why some were given eligible priority to leave Afghanistan over others.

Refugees from Afghanistan have spent a little more than two weeks settling in to their news homes across Canada as they escape the chaos, violence and Taliban takeover of their country.

A total of 14 communities have been receiving refugees in Canada, including in Calgary where 56 Afghans have now settled.

“We have a very carefully designed plan, the right partners are in place, and they are doing everything we can to make sure that these people are having a good experience, because they just came from a very difficult situation,” he said.

“Because there is still a tense situation in Afghanistan, we are a little bit higher on the issues of security and privacy, but asking everyone to respect this process as they move to permanent accommodations.”

Birjanbian – who is the co-chair of the National Afghan Project is an immigrant himself after having moved to Calgary from Iran in 1988 – has been helping an estimated 1,500 refugees each year settle into the city.

“You have to remember that these people were lucky enough to get on one of those planes out of Afghanistan, they have family members they left behind, but they are so appreciative of this opportunity.”

According to CCIS, about 50 per cent of the Afghan refugees arriving to Calgary are children, which is why the organization is making efforts to teach parents about the Canadian school system.

In Afghanistan, the future of education is uncertain as schools are closing and women are being denied their right to learn.

Pooneh Abedian, a youth and child councillor, immigrated to Calgary from Iran in 2008. She is currently conducting several orientations for new Afghan families so that they can understand what to expect in the years ahead.

“I inform the families about the school system, the registration and fees, and we’re able to support them for two years. We help them learn about the culture and the lifestyle which is super important for us to just guide them in understanding the community and society,” she said.

“I love my job and I love working with people because I’m a newcomer too and I understand their feelings.” 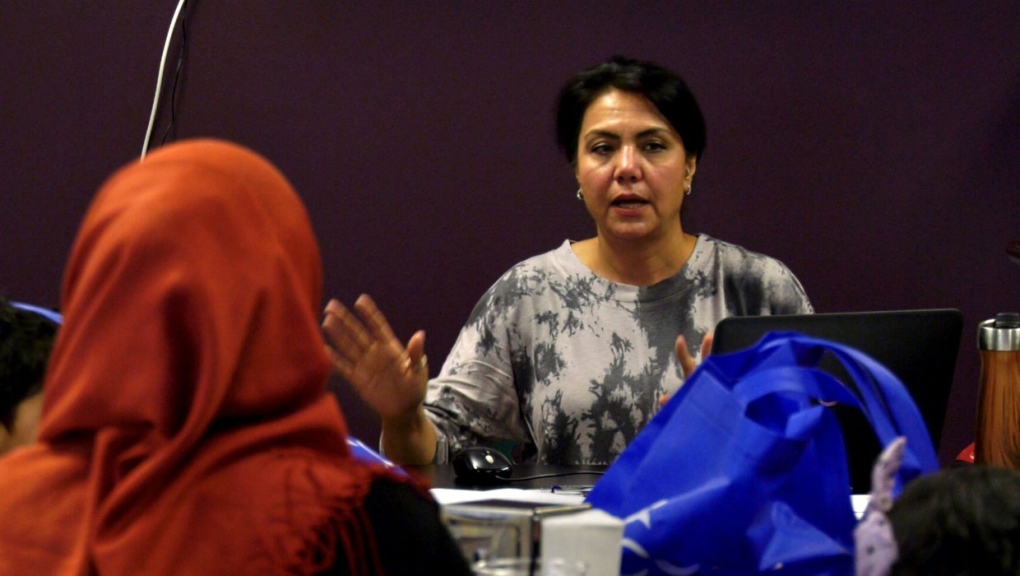 CCIS says it expects more Afghan refugees to arrive in Calgary in the coming weeks and months ahead. More than 100 veterans have also contacted the organization recently to help volunteer their time to help refugees get acclimatized to their new surroundings.

Calgary’s Centre for Newcomers has also sent six certified settlement practitioners to Toronto in an effort to help with an influx of Afghan refugees.

For now, people like Ziayee are holding onto hope that their family members will have the opportunity to safely make their way to Canada.

“We can’t let our nation sink in the hands of multiple terrorist groups. This is the international community’s fight, we are on the ground, we are on the front lines, but we need support.”

A Canadian naval officer has been relieved of her duties aboard a coastal defence vessel deployed on a NATO operation in Europe over allegations of inappropriate sexual conduct.