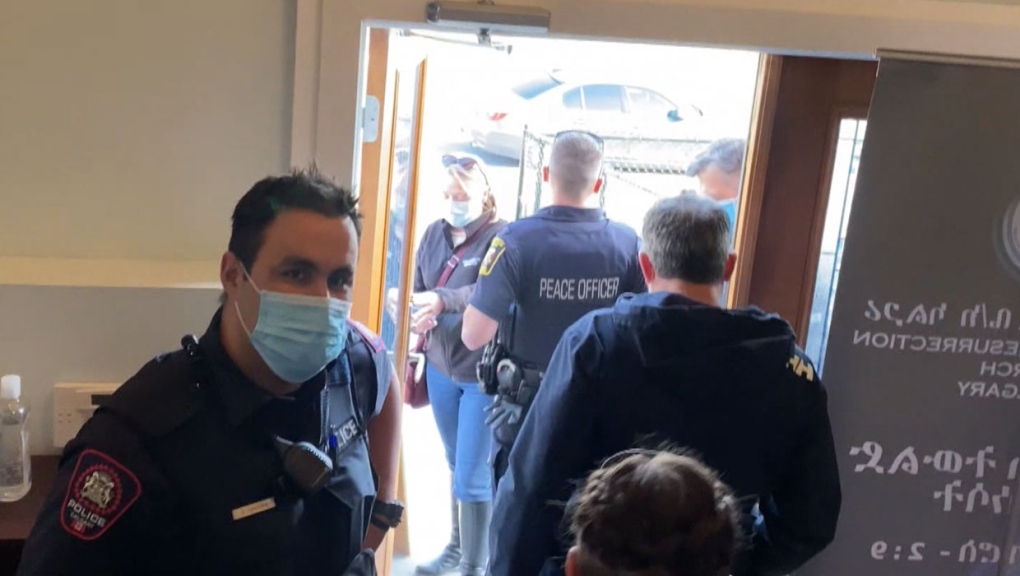 CALGARY -- A Calgary church leader, who has been charged under Alberta's Public Health Act (PHA) before, has posted a new video of a recent interaction he had with authorities over the COVID-19 rules.

Artur Pawlowski, the pastor of Calgary's Street Church, was holding a service at the building, located at 4315 26 Ave. S.E., on Saturday.

In the YouTube clip, Pawlowski confronts a group of six officials consisting of members of the Calgary Police Service (CPS), Alberta Health Services (AHS) and City of Calgary Bylaw Services.

He is heard shouting at them, calling them "Nazis" and "Gestapo".

AHS confirmed to CTV News that they did attend a gathering at the Fortress (Cave) of Adullam on April 3, the building where Pawlowski was holding a meeting of his Street Church.

A spokesperson says the inspector "was there to observe whether the organization was following" Alberta's health guidelines laid out in regards to the COVID-19 pandemic.

However, because of the confrontation, they could not complete their work.

"Our inspector was not granted access inside, so was unable to confirm if (Chief Medical Officer of Health) orders were being followed," said Marni Kuhlmann, senior communication advisor with AHS, in a an email to CTV News.

She adds the job of inspectors is vital to maintaining public health in the face of the pandemic.

"Our inspectors have an important job to do and we ask that business owners and organizations treat them with respect. We stand by all of our public health inspectors who are doing an incredible job in trying and challenging circumstances," she said.

"We expect that all places of worship across Alberta follow the CMOH restrictions and we thank everyone who continues to do their part to prevent the spread of COVID-19 this holiday weekend and throughout the pandemic."

CPS TASKED WITH KEEPING THE PEACE

Calgary police say they were called to assist with a situation at Pawlowski's Street Church on Saturday. The CPS says one police officer was dispatched to the scene.

"The concern was that the people in attendance were not adhering to the government’s COVID-19 public health orders, which are in place to ensure everyone's safety," police said in a release.

Officials say the police officer's presence was only to maintain the peace during the incident and while "the organizer of the gathering was uncooperative" with the investigators; no tickets were issued at the time.

However, that doesn't mean they won't be handed out at a later date.

"It will be up to our partner agencies to determine subsequent enforcement activity in response to this situation," police said in the statement.

The AHS public health inspector and all other parties left the building a short time later. They say they remained inside Street Church for approximately one minute.

The CPS says it has no intention of interrupting anyone's holidays or religious events, but it has a duty to support its partner agencies that are tasked with upholding the PHA.