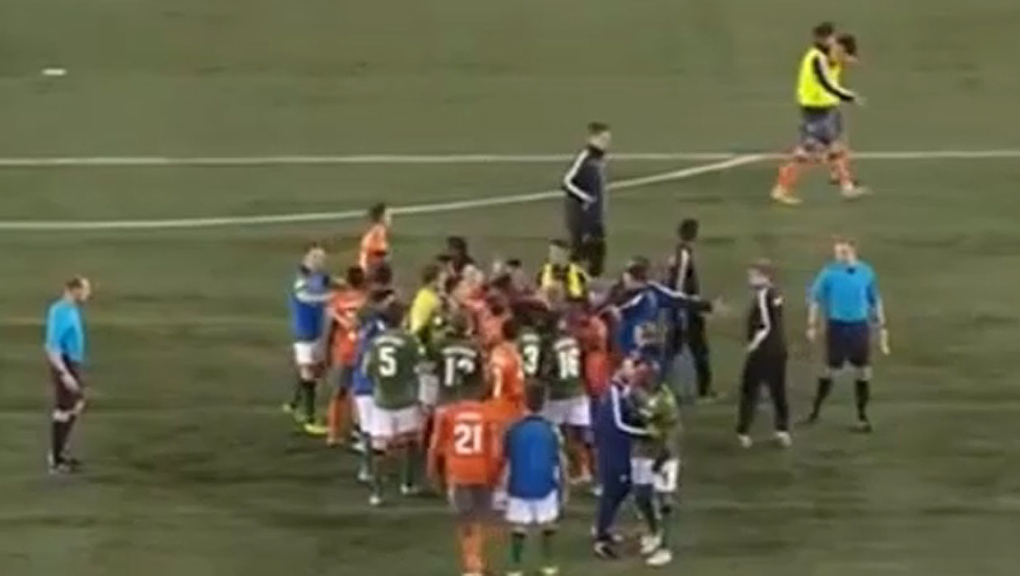 Canada Soccer says sanctions are expected against members of Cavalry FC and Forge FC following a fight that broke out after June 4's game. (Supplied: OneSoccer)

Members of Calgary's Cavalry FC and Hamilton's Forge FC are facing disciplinary action following a fight that took place at the end of a match last week.

A number of players from both teams were involved in a scuffle after June 4's match that Cavalry players say was sparked when a racial slur was uttered by a member of the Forge's coaching staff.

The matter was referred to Canada Soccer and that agency announced the allegations of misconduct will be heard by the Canada Soccer Disciplinary Committee.

The allegations include that Forge FC and Cavalry FC failed to ensure their players and/or officials conducted themselves in an orderly fashion.

Additionally, Cavalry FC forward Jordan Brown and Forge FC's midfielder Tristian Borges face separate allegations of misconduct relating to their involvement in the fight that took place after the match.

Canada Soccer says sanctions can include, but are not limited to, a financial penalty, a deduction of points and/or exclusion from the competition.

Both teams and the Canadian Premier League say there is a zero-tolerance policy when it comes to racist, discriminatory, disrespectful or offensive behaviour of any kind, under any circumstances.

Meanwhile, Calgary defeated Hamilton in their first match since the incident on Tuesday night.

Cavalry FC will now play against Major League Soccer's Vancouver Whitecaps in the next round of the domestic tournament.

The first game will be at Spruce Meadows on July 10.