Calgary Folk Festival close to selling out of limited-entry tickets 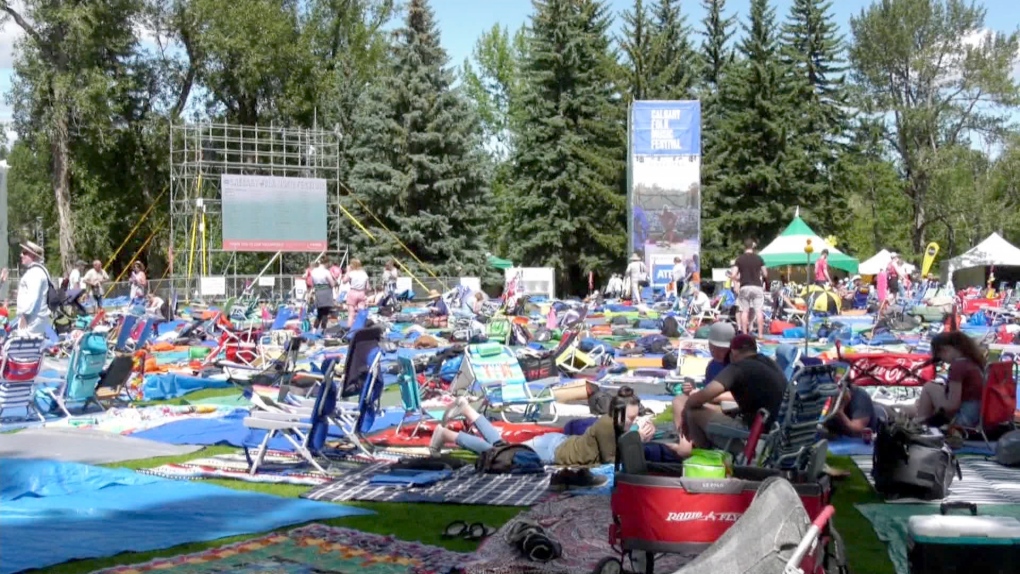 Tickets are on sale for Summer Serenade, the Calgary Folk Music Festival. There is a limited capacity for attendees this year, which means tickets are going fast.

Ticket sales are trending around 70 per cent sold out, according to Kerry Clarke, the Calgary Folk Music Festival’s artistic director.

For those interested in attending they should go online to get their tickets. Any remaining tickets may be purchased at the festival, but only if they’re not sold out online.

One ticket gives attendees a group plot for up to six people – four adults and two children. These plots are called “tarp blocks” and are meant to serve as seats, like in a movie theatre.

“It’s building on the culture we’ve had for a long time. Which is people coming from the main stage and sort of stake out their zone, but at that time, it was a bit of a free for all.” Clarke says. “This year there will be equal space in between so we can be more controlled.”

People can bring their own tarps or blankets as well as snacks and drinks. Beverages will be served at the festival, but there will not be a beer garden this year.

That means Calgary is the last best folk fest in the west.

“That was a challenge in and of itself, just trying to organize an event in a pandemic with so many unknowns,” says Clarke. “We’re not calling it the Folk Festival we’re calling it Summer Serenades because it’s a very different event this year.

“We really had to reinvent ourselves, on every single front, weather it be our volunteer organizers, our executive director, myself, production, our site, everything is different this year.”

A major change to the festival is that all the shows will start at 6 p.m. during the weekdays, and matinees on the weekend starting at 11:30 a.m.

There are still opportunities for people to volunteer too. Typically, this is a popular event for volunteers to jump on. Pandemic hesitancy is speculated by Clarke as one of the reasons volunteer spots hadn’t filled up as fast as usual.

“We do still have a few spots remaining and they are mostly in the safety and security,” Clarke said. “Hosts and helping people set up on their spots. And just making sure that everyone has a really good time. We have a few spots if people interested in that kind of role.”

This year’s folk festival still promises to be as exciting and fun as past years, and the music will be even better.

“Nine of the 36 artists are from Alberta. We’re really proud of that. But then we have really key Canadian artists, Charlotte Cardin, who’s a star in Quebec and beyond,” Clarke says. “We have Hawksley Workman, a Tribe formerly Called Red – (now) The Halluci Nation, it’s an all-star Canadian lineup we’re really proud of.”

Pandemic lockdowns made it hard booking gigs for musicians this year. Clarke says it was actually a blessing in disguise because there were so many musicians that were more-or-less waiting for something to do this summer.

“Like everything else, we had a shortened time to book (the festival),” Clarke says. “What happened was we got very easy yeses and easy nos, very quickly.

“We’ve never booked an event this quickly with such high calibre talent. These are pretty iconic artists we got coming here. At least nine or 10 marque artists, household names.”

Summer Serenade is expected to begin without delay on July 22.

Tickets can be purchased online, while volunteers can also apply online to be a part of the festival.

A source close to the family of Brian Laundrie says Gabby Petito's fiance, who is now the subject of a federal warrant, left his parents' Florida home last Tuesday without his cell phone and wallet.