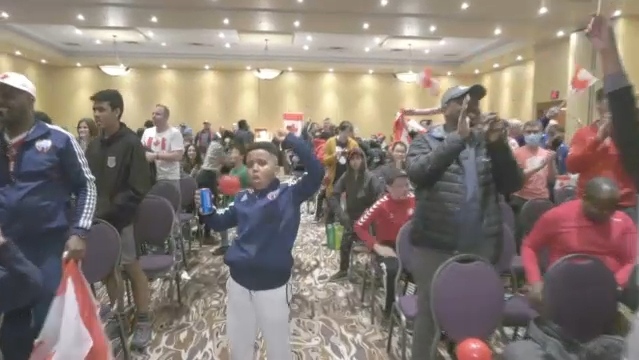 A large group of young soccer teams from all over Calgary were among the many fans across the country who tuned in to watch Canada's men's national team qualify for a spot at this year's FIFA World Cup tournament.

The event, at the Deerfoot Inn and Casino, invited more than 400 young players who all cheered on the national squad as they scored four goals to shutout Jamaica. The last time Canada's men's soccer team qualified for the World Cup was 36 years ago.

The game was played at Toronto's BMO Field, but the Calgary Minor Soccer Association (CMSA) said there was plenty of fun and action right here in Calgary at the event.

"It's a historic moment for Canadian soccer," said Carlo Bruneau, CMSA executive director. "In two days, the passion that exists within the soccer community here in Calgary, we got it out to the membership, and they came out in droves.

"The enthusiasm for the beautiful game here is unmatched," Bruneau added. "We're really proud of what our team did but what the community does to consistently and constantly support soccer here in Calgary and Alberta."