CALGARY -- As a way to protect residents from COVID-19 infection as well as providing some valuable outdoor time, the city has closed some of the busiest roadways to vehicles.

The goal is to give Calgarians ample space to walk, enjoy the outdoors and stay the prescribed two metre distance away from others.

Mayor Naheed Nenshi told CTV News that the intent is not to create a "street festival" but is encouraging people to go outside.

He says the roads are being closed near the areas where the city has found the pathways have gotten a little too crowded. Nenshi says he won't give out a list of roads that will be closed because he doesn't want to encourage everyone to collect in those areas. Instead he wants Calgarians to explore their own neighbourhoods while maintaining the rules.

"It's going to be beautiful this weekend, it's going to be our fifth fall-spring which usually happens around the end of March," he said. "But we are asking people to really follow some basic guidelines. You got to keep two metres, that's six feet. It's the length of a bicycle or, I'm told, a full-grown llama."

He says that if you perceive you're getting to close to someone or someone is getting too close to you, you should slow down, speed up or move completely away from others to an empty area.

So far, the closed routes have been a success. One runner told CTV News she appreciated the added room.

"There’s more pedestrians on the street than vehicular traffic, so I think it’s awesome to recognize that and give us some space," she said. "I think it’s great."

Another walker, Kim, said she also liked the closures.

"There’s tons of people on these pathways when it’s not cold out. I appreciate that they’re doing this."

Jennifer was walking along Elbow Drive. She said she was surprised at how many Calgarians were out last weekend.

"It’s hard because everyone wants to go outside, especially after being cooped up all wintertime, so I get it," she said.

The city says the closures are only going to be temporary over Saturday and Sunday. Regular traffic will resume Monday.

The city's new rules, which came into effect Friday evening, aren't all fun and games though as all recreation areas and skateboard parks are now closed to the public.

Nenshi says that doesn't mean city parks themselves are being blocked off.

"The parks are still open. You can still go and enjoy the park as long as you follow some basic guidelines, as long as you have that social distancing." 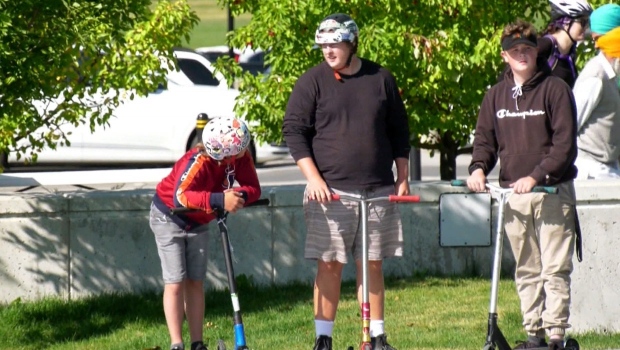 However, things like a basketball game with your neighbours should be avoided, he says.

"That's too close. You're sweating and breathing hard – that's just not safe. We're asking for all of those organized sports to go away."

Again, the courts themselves are still open, but Nenshi says they are only open for social distancing.