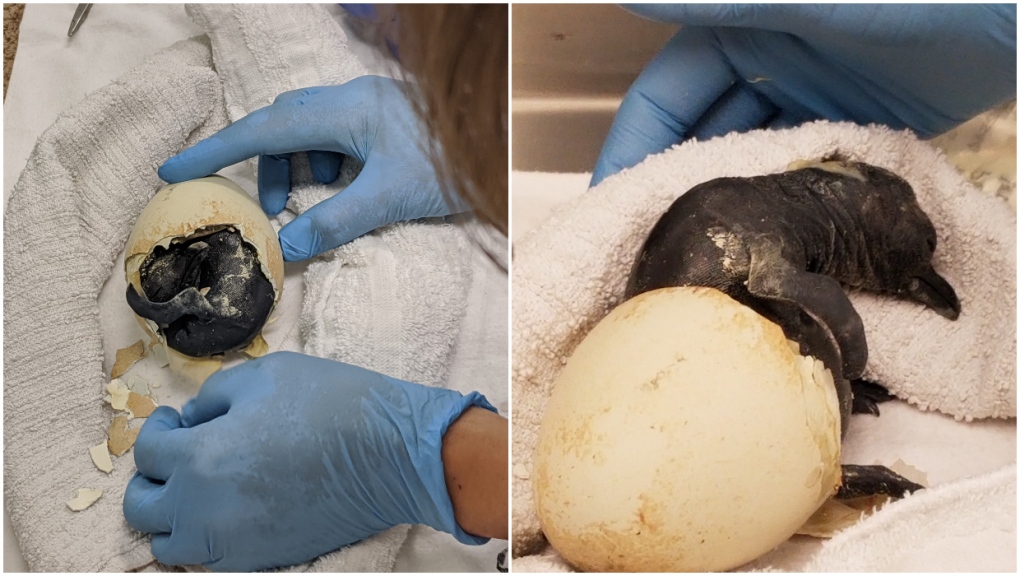 A king penguin chick had to be helped from its shell after it was damaged during gestation. (Courtesy Calgary Zoo)

CALGARY -- Despite its egg being cracked and needing the help of specialists at the Calgary Zoo, officials say a newly-hatched king penguin chick is now doing well and bonding with its parents.

The zoo's animal care team had been paying close attention to the egg that was expected to hatch in late July to mom 'Grace' and her partner 'Solomon' and jumped into action after egg rolled into some rocks, cracking it.

The egg was taken to an electronic incubator where the zoo's veterinary team carefully patched the damage in hopes the chick would survive the rest of its two month incubation.

"With the egg safe and warm in the incubator it was closely monitored for its progress for several days, ever-hopeful that it would survive," the zoo said in a statement.

"Birds rely on an air cell in their egg to breathe, and this had been compromised when the egg cracked."

The chick tried for days to break its way out — in a process called pipping — and when it ran out of strength, zoo officials stepped in to help, gently breaking the shell then the egg membrane so that it could ease its way out.

The chick fully hatched on July 18.

This is the second time the animal care and health team at the Calgary Zoo have helped hatch a king penguin chick from a damaged egg.

"The chick has been reunited with parents Grace and Solomon, who warmly welcomed their wee one back after its challenging arrival," the zoo said.

"They’re developing strong bonds and care routines, and the chick will continue to be warmed at the feet of its parents for a month or more."

Visitors can catch glimpses of the chick in Penguin Plunge as it emerges from the brood patch of its parents for food but the chick won’t be fully independent for some time yet.

Penguin parents Grace and Solomon are both original members of the zoo's Penguin Plunge, having arrived in 2012.

A gentoo penguin chick was also hatched at the zoo earlier this year.