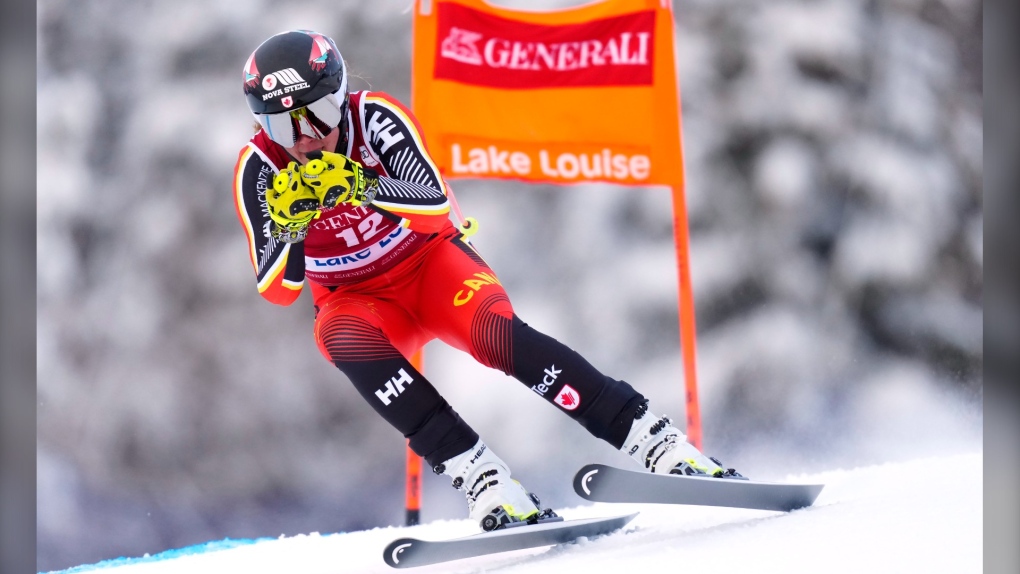 Marie-Michele Gagnon of Canada skis down the course during the during the first women's World Cup downhill training run in Lake Louise, Alta., on Nov. 30, 2021. (THE CANADIAN PRESS/Frank Gunn)

The 32-year-old's transition from slalom and giant slalom to downhill was interrupted by a lost season due to injury, but she's now among the world's elite in speed disciplines.

"There's a lot of good things happening right now," Gagnon told The Canadian Press. "I'm in a much better place than ever right now in that journey.

"I have a really good start position. I'm in with the best 20 in the world, so I get a good start number. My chances go up because I have the same conditions as the fast people."

The men's World Cup in Lake Louise was whittled down from a three-race weekend to one. One of two downhills and Sunday's super-G were cancelled because of too much snow.

The resort in Banff National Park had accumulated about half a metre of wet snow as of Monday. Rain moved in this week.

Gagnon was seventh in Tuesday's first training run, but runs Wednesday and Thursday were called off.

The forecast for women's race weekend in Alberta is more promising, with less precipitation and temperatures below freezing.

Both the men's and women's World Cups in Lake Louise were cancelled last year because of the COVID-19 pandemic. Racing in Canada again after a year's hiatus is meaningful for Gagnon, of Lac-Etchemin, Que.

"It's wonderful," she said. "It's really nice to have a home race. It's good for the future of racers in Canada to also have that hill be ready (because) Nor Am goes after the World Cup.

"I personally am really happy to be here because I like being at home, the track here and the people."

Once a tech-race specialist with a pair of career World Cup victories in alpine combined, Gagnon began transitioning into speed events five years ago.

The two-time Olympian suffered season-ending knee and shoulder injuries crashing in a Lake Louise training run in 2017. She wasn't able to compete in the 2018 Winter Olympics in Pyeongchang, South Korea.

The injuries and loss of a season interrupted Gagnon's quest to be a world-class downhiller. The resumption of that goal needed time to regain confidence and more race mileage.

She posted three top-10 results in downhill last winter and earned her first World Cup medal in a speed event. She took bronze in super-G in Garmisch-Partenkirchen, Germany.

"It was honestly the best feeling to have a good season last year," Gagnon said.

"I was kind of at the point where the team didn't have much money and they almost couldn't have a women's speed team. It was almost like the end of it for me. Last year, to overcome that, and to be the only one on the entire team to have a podium was really special for me.

"This podium was my most exciting podium I've ever had in my career."

Gagnon placed sixth in super-G and 13th in downhill in February's world championship in Cortina, Italy. Her best result in Lake Louise so far was 10th in super-G in 2013.

Gagnon's downhill teammate Roni Remme of Collingwood, Ont., placed fifth in alpine combined, which is the total time of a slalom run and super-G, in Cortina's world championship.

Toronto's Candace Crawford and Stefanie Fleckenstein of Whistler, B.C., who weren't named to the women's team by Alpine Canada this season, are racing in Lake Louise as independents.

Emily Brydon was the last Canadian woman to stand on the Lake Louise podium, finishing second and third in 2009 downhills.

Shiffrin excels in slalom, giant slalom and alpine combined, but has won both a downhill and a super-G in Lake Louise during her career.

The ski resort west of Calgary has been the site of 78 women's and 46 men's World Cups races since then.

This report by The Canadian Press was first published Dec. 2, 2021.