CALGARY -- Canada's top doubles luge team had to get creative in order to find a new sponsor to help fund their 2021 World Cup season.

Tristan Walker and Justin Snith are getting ready to head to Germany to start their World Cup season to compete in three World Cups and a world championship in January and like all high performance athletes, the dynamic luge duo rely on sponsorship deals to help finance their World Cup and Olympic dreams - most years.

But in 2020, because of COVID-19 and tight financial times, Canada’s top doubles luge team lost their title sponsor just when they needed it the most.

Walker says that was a tough pill to swallow.

“We know 2020 has been challenging for all Canadians and we’re no different,” Walker said.

“Shortly after making a big investment in upgrading our equipment we found out that we would be losing our main sponsor.”

Walker and Snith knew it wasn’t the right economic climate to go searching for a new title sponsor but they didn’t want to leave their sled blank.

So they came up with a creative solution. 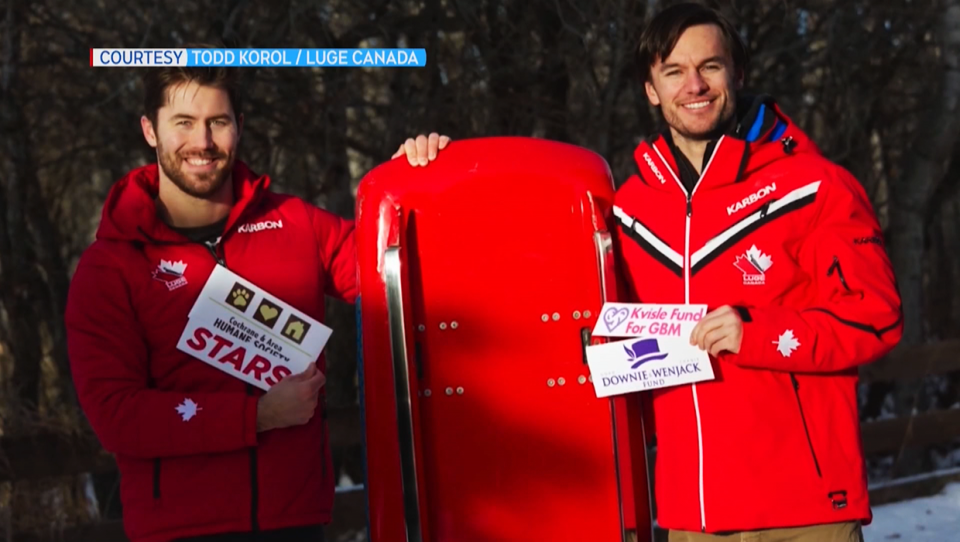 Snith says they’re both involved in charities so why not pick their favourite ones and let them have the space?

“We decided to pivot and do some good within our community in Canada and give back to a couple of charities that are close to us and help them out a bit," Snith says.

While in Europe they will showcase four different charites on their sled.  Here’s the race schedule.

Snith says helping in any way they can is what it’s all about.

“We’re lucky enough and fortunate enough to still have a couple of races to compete in this year.  There’s some sports that aren’t getting that opportunity,” he told CTV.

“So I think for us to capitalize on that and get these charities names out there even more is perfect for us.”

“Obviously we don’t have the means to give back financially but we do have a platform and we do have the logo real estate on our equipment that would normally go to a paying sponsor. We decided why not give it to some people that deserve some recognition?”

The plan right now is for Snith and Walker to leave for Germany on Boxing Day.  But Walker knows with all of the uncertainty in the world they have to be ready for anything.

“We’re fully aware that the plug could get pulled any day.  We could be on the way to the airport and get the call saying it’s not happening.  So we’ve just got to roll with the punches.”

Even though Walker and Snith lost their title sponsor, Global Steel has remained on as a partner sponsor.