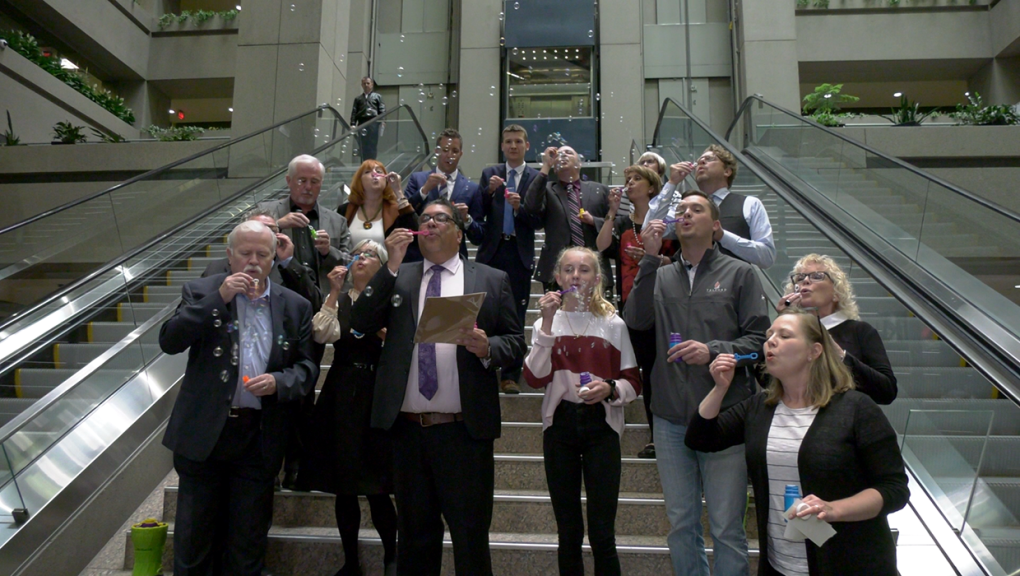 City council took a break from their council chambers Monday to blow bubbles in support of Pulmonary Fibrosis awareness.

Mayor Naheed Nenshi climbed the lobby staircase of the municipal building Monday afternoon with his council colleagues, equipped with bubble wands in hand and the struggles of those who suffer from the debilitating disease in their hearts.

In an interview, Nenshi said “It was a great opportunity to have a little fun blowing bubbles, but it's also reminding us that there are people whose lung capacity is so weak they can’t do something as simple as blowing a bubble.

"Raising awareness and funds for that is an important thing for us to do as a community.”

Fell explained that Pulmonary Fibrosis is a large group of diseases that cause inflammation and scarring in the lungs.

She added that “over time, the scarring can get worse, patients experience shortness of breath and coughing fits and as the disease progresses many will need oxygen and unfortunately a proportion of these patients will even die from their Pulmonary Fibrosis.”

An estimated 30,000 Canadians are affected with different kinds of Pulmonary Fibrosis. 12-year-old Abbie Clark has first hand experience with the disease: she’s lost several family members to Pulmonary Fibrosis including her grandpa, aunt and a cousin.  She’s doing everything she can to make a difference and was inspired to organize a run/walk.

“It started in grade three when my teacher challenged us to do a project to better our community,”  which Abbie says immediately made her think of her family's struggles with Pulminary Fibrosis.

“I wanted to help," she said. "Not a lot of people know about Pulmonary Fibrosis so I wanted to raise awareness and support.”

This year the 4th annual Clarke Walk for Pulmonary Fibrosis will set off at 11:30 am September 15th at Edworthy Park. For details on how to get involved visit www.cpff.ca