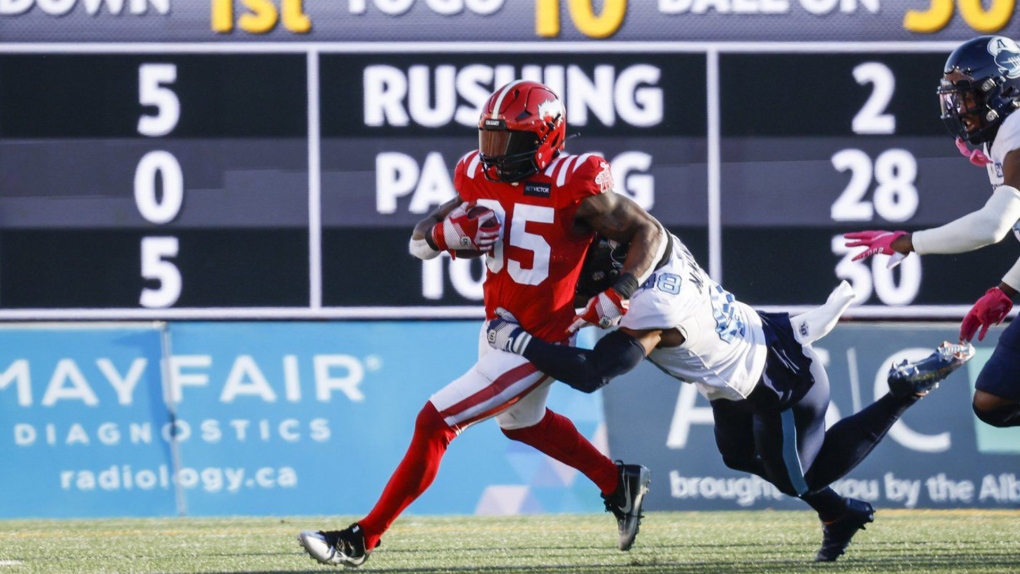 Cam Judge's 71-yard interception return for a touchdown late in the fourth quarter highlighted a stellar performance by the Calgary Stampeders' defence in a 29-2 win over the visiting Toronto Argonauts on Saturday.

After serving a one-game suspension for punching B.C. Lions receiver Lucky Whitehead, Judge swung momentum to Calgary when he picked off McLeod Bethel-Thompson for a converted touchdown and a 21-2 lead with just over four minutes remaining in the game.

"I let the guys down last week. They had my back though, so I knew I had to put something out there for them," Judge said.

Stampeder running back Ka'Deem Carey scored a three-yard rushing touchdown in the final minute. The CFL's rushing leader compiled 92 yards on 14 carries for 949 yards on the season.

Reggie Begelton and Tommy Stevens also scored touchdowns for the Stampeders, who halted Toronto's run of consecutive wins at four.

Stampeder quarterback Jake Maier completed 17 of 24 passes for 175 yards and one touchdown pass in front of an announced 21,299 at McMahon Stadium. He improved to 4-2 in starts since taking over for Bo Levi Mitchell.

"I thought that was one of the best defensive performances I've ever seen," Maier said. "That's a great quarterback over there and a good receiving corps. They've scored a lot of points against a lot of teams and to hold them to two points is unbelievable."

Argonauts starter Bethel-Thompson was 19 for 38 in passing for 194 yards. Each quarterback was intercepted twice.

Both football clubs had playoff berths in their respective divisions locked in before Saturday's game, but the outcome was still key to their playoff pictures.

The Argonauts (8-6) remain atop the East Division, but their lead shrunk to two points with the Montreal Alouettes (7-7) beating the Edmonton Elks 25-18 earlier Saturday.

With three games remaining in their regular season, the Stampeders (10-5) are trying to keep pace with the B.C. Lions (10-4) in a race for second place in the West, and the chance to host the division semifinal on Nov. 6.

B.C. took the season series 2-1, however, and would be the higher seed in the event of a tie with Calgary.

The defending Grey Cup champion Winnipeg Blue Bombers (13-2) are poised to take the West and host the division final again.

Toronto is assured of a home playoff game. The Argos want it to be the East final Nov. 13.

The Stampeders improved to 4-3 at home this season and 5-0 against East Division clubs. The Argos dropped to 2-4 against the West.

No scoring in the first or third quarters of the game, Calgary converted Judge and Jameer Thurman interceptions into touchdowns while Toronto didn't generate any points from a pair of Henoc Muamba picks in the game.

"I would like to see a few more offensive plays on our side, but punting was excellent, defence was excellent, special teams and neither team could really get their footing offensively," Stampeder head coach Dave Dickenson said.

Chad Kelly drew in for Bethel-Thompson after Judge's touchdown.

"It's good to get Cam back. He did the time and he did the crime," Dickenson of Judge. "He is a playmaker. When Cam got that pick, that was what to me really kind of changed the game and put it in our favour and I had a feeling we were going to win from there."

Kelly completed one of five passes for seven yards and was picked off on the final play of the game.

Stevens, Calgary's third-string quarterback, finished an eight-play, 70-yard drive with a one-yard plunge converted by Rene Paredes for a 14-2 lead at halftime.

Toronto settled for a single point and trailed by five points when Boris Bede kicked wide right on a 46-yard field-goal attempt midway through the second quarter.

Thurman's interception gave Calgary the ball at Toronto's 23-yard-line early in the quarter. Maier's 16-yard throw to Begelton at the goal line capped a quick, converted scoring drive for a 7-1 lead.

John Haggerty kicked a 71-yard punt single for Toronto in the first minute of the second quarter.

The Argonauts are at home to the Lions on Saturday. The Stampeders head into a bye week followed by a game Oct. 14 against the host Hamilton Tiger-Cats.

Lawyers for 'Freedom Convoy' organizers have won their bid to get access to unredacted versions of 20 documents at the Public Order Emergency Commission.

Pain relief from marijuana comes from a belief it helps, study finds

Some people suffering pain from cancer and other chronic diseases turn to marijuana to ease their suffering, but much of that relief may come from simply believing weed will help, a new study found.