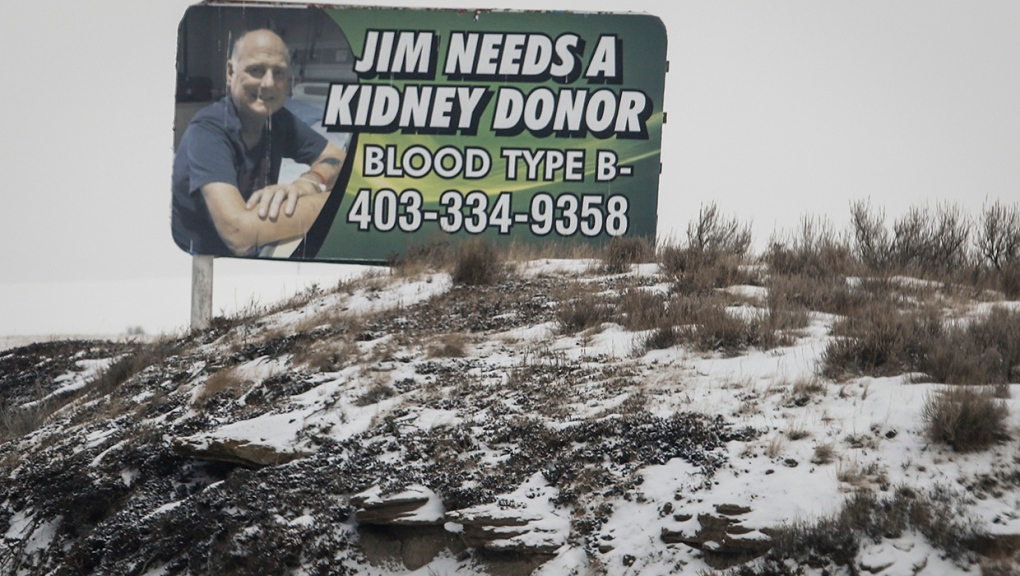 A billboard featuring Jim Lomond, who is looking for a kidney donor, in Drumheller, Alta., Thursday, Jan. 16, 2020. Jim Lomond, a 54-year-old former oilfield worker, has been waiting for the last four years for his fourth kidney transplant. He has rare B-negative blood, which makes finding a donor that much more difficult. THE CANADIAN PRESS/Jeff McIntosh

CARBON -- The large billboard overlooking the town of Drumheller in east-central Alberta is hard to miss.

Next to a photo of a smiling man in a blue shirt, his arms crossed, the sign reads: "Jim really needs a kidney donor."

Jim Lomond, a 54-year-old former oilfield worker, has been waiting for the last four years for his fourth kidney transplant. He has rare B-negative blood, which makes finding a donor that much more difficult.

He keeps a positive attitude, but says it's hard being on a waiting list and waiting for the phone to ring.

"It's demoralizing to know you're on a machine to keep you alive," says Lomond, brushing away a tear, as he sits in his home in Carbon, a village near Drumheller.

"I want to have a normal life and do what everybody else does."

Lomond says someone involved with his daughter's high school football team suggested using a billboard to find a donor. Fundraising helped pay for the sign. Posters also went up in business windows, at the local rink and on transport trucks.

He's received one call, but didn't hear back from the person.

Putting up a billboard costs between $1,500 and $2,000 and rental is about $200 a month, says Fred Makowecki of Image Crafter Signs in Drumheller.

He helped another resident in need of a kidney, also named Jim, put his search on a billboard and on bumper stickers last year.

"Now we're working on the other Jim."

Going directly to the public isn't unheard of.

Eugene Melnyk, billionaire owner of the Ottawa Senators of the National Hockey League, made a public plea for a living liver donor in 2015. He had end-stage liver failure and his family or friends were medically suitable donors.

"He put it on Facebook, he put it out on his Ottawa Senators website, and he advertised and he ended up getting a liver," recalls James Breckenridge, president of the Canadian Transplant Society in Toronto.

More than 500 people volunteered to give a portion of their livers to Melnyk, and one was selected.

The need is bound to continue. A transplanted kidney lasts about 10 to 15 years before it gives out, Breckenridge says.

Michael Terner of the Canadian Organ Replacement Register at the Canadian Institute for Health Information says the demand for transplants is being driven by higher rates of kidney failure.

And the No. 1 cause of kidney failure in Canada is diabetes.

"The transplant is by far the gold standard procedure here," he says. "For those who are on dialysis, about 44 per cent will survive past five years. You can't live without it."

Alberta is considering whether to take Nova Scotia's lead by bringing in presumed consent for organ donation. Alberta Premier Jason Kenney, when told last week of Lamond's billboard plea, says people shouldn't have to take matters into their own hands.

"That's very sad if people have to go to that extent," he said.

Lomond, who moved to Alberta from Newfoundland in 1997, has Berger's disease, a rare disorder in which a protein buildup causes inflammation that damages kidney tissues.

His father gave him a kidney when he was 17. It lasted just 36 hours.

Another transplant in 1988 lasted five years. In 2000, he received another kidney, which kept him in good health for 15 years.

Dialysis kept him going in between transplants and he's back on it now - up to six hours a day, five days a week.

He says he's grateful dialysis has kept him alive all these years, but he would like things to be normal.

"I have a positive attitude about everything. I do not look on the negative side of anything.

This report by The Canadian Press was first published Jan. 27, 2020