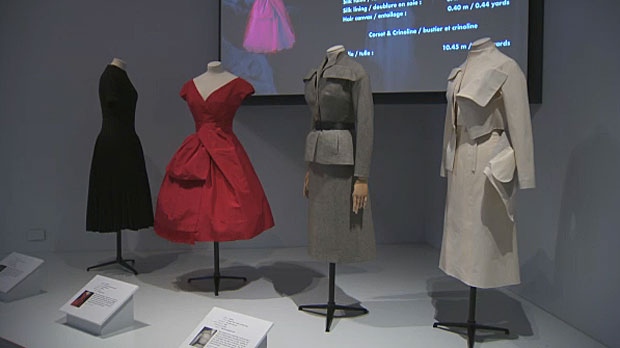 A number of designs from the early days of Christian Dior will be on display at the Glenbow Museum, part of an exhibition available until the beginning of June.

A new, one-of-a-kind exhibit set to open this week at the Glenbow Museum features some unique works from one of the world’s most famous fashion designers.

The Christian Dior gallery includes a number of exquisite gowns from the first 10 years of the 42-year-old’s career in Paris, from 1947 to 1957.

Starting Sunday, visitors to the Glenbow Museum in downtown Calgary will be able to take in the early haute couture collection that helped to revive the glamour of fashion after the Second World War.

The collection came to Calgary from the Royal Ontario Museum and includes exquisite gowns and smart daytime apparel, perfumes and accessories, all designed by Dior himself.

Dr. Alexandra Palmer, senior curator with the Royal Ontario Museum, says when Dior first released his designs, they were ‘the new look’ for the fashion industry.

“It was the antithesis of post-war design, it was soft shoulders, cinched-in waists and long skirts, which was shocking at the time because people had restrictions and difficulty finding fabric during the war.”

Palmer says there were some protests over Dior’s designs at first, particularly over the price of the gowns, women eventually came around and fell in love with them.

Donna Livingstone, the president and CEO of the Glenbow Museum, says this is very first fashion exhibit the facility has ever put on and the only one in Western Canada too.

“This is the perfect exhibition for Glenbow to be hosting. We are positioning ourselves as Calgary’s public art museum and, for us, that goes beyond visual art. It goes into the art of making and the creativity that’s seen through fashion, design and all different aspects.”

She says the museum was drawn to the Dior collection because it’s not just about clothes.

“It’s about the history and what Christian Dior set out to do; to reinvent Paris as a fashion centre. That really captured our imagination, but the whole story behind it, the detail it went into, really resonated with us.”

Palmer adds Dior’s first designs have also had such an impact on modern fashion too.

“You them in graduation balls at high school and what would the red carpet be without these strapless dresses with big bouffant skirts. It’s still an ideal beauty that we carry with us today.”

Dior released 22 collections before his death in 1957, but his clothing accounted for over five percent of France’s total exports.

The exhibition runs from February 3 until June 2. More information can be found on the Glenbow Museum's website.