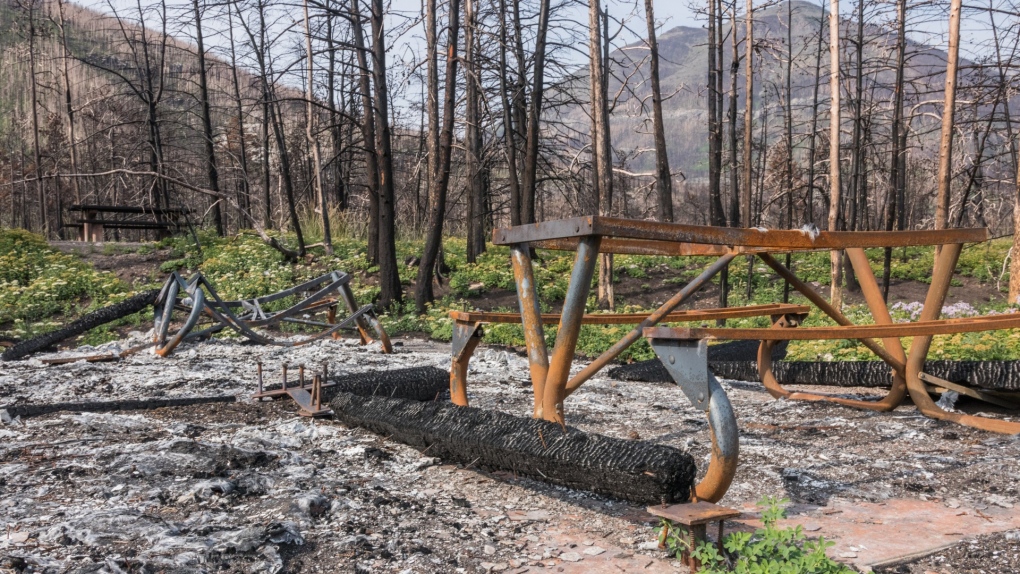 Damage to the Crandell Lake Campround from the 2017 Kenow wildfire. (Parks Canada)

Like the land itself, a new management plan for Waterton Lakes National Park is marked by a powerful wildfire that tore through the southern Alberta park five years ago.

The 2022 plan, tabled in Parliament this summer, sets the park's direction for the next decade. It includes dealing with climate change and invasive species and considers ways to strengthen Indigenous relationships and connect with Canadians.

The Kenow Wildfire, however, led to a major change from the previous plan. The fire burned more than 19,000 hectares — approximately 39 per cent — of the mountainous park in September 2017 and damaged many popular picnic areas, campgrounds and hiking trails.

"We've been pretty fortunate," Parks Canada's Locke Marshall, who's the superintendent in Waterton, said in a recent interview. "We've had a lot of support from the federal government."

Marshall said some of the damaged infrastructure was already being replaced before the fire, but other areas required a complete rebuild.

"There's been a lot of work that has been done," he said. "Initially, when the fire went through, our parkways were not available, so we had to work on them to get them ready to go.

"We lost our visitor centre, but we were already in plans to build a new one. Many of our picnic areas got damaged. We've done a lot of work on our trails."

Some areas, such as roads and bridges around Red Rock Canyon, are still being rebuilt and the Crandell Mountain campground is still under construction, he said.

Mike Flannigan, a professor of wildland fire at Thompson Rivers University in B.C. and Canada Wildfire's scientific director, said the fire also affected a lot of the park's natural landscape.

"It burned a good chunk of the park with high-intensity severity," he said. "The effect on the vegetation and the soil was severe because it was hot and dry."

Flannigan said he's interested to learn more about how the ecosystem has recovered in the park in the five years since the fire.

"I'm hoping Waterton uses this as an educational opportunity to inform the public about fires and regeneration and biodiversity and wildlife," he said, noting there can be positive changes.

Marshall said Parks Canada has learned a lot and will continue to learn from the wildfire through various research projects.

"This has probably been an opportunity that we really haven't seen in the past — and that's just to see what the effects of a widespread fire, a fairly intense fire, has on a landscape and how the landscape itself recovers from it," he said. "And also how that recovery may be affected by changes to the climate that we've seen in the last several decades.

"So, it's a really good opportunity for science."

The research, he said, could take decades to complete. He noted there's already some visible changes in the forests.

"There has been a bit of a transformation," he said. "A lot of the forests were predominantly conifers — pine, spruce, Douglas fir. In some places … we're seeing more aspen trees, shrubs and in some places ... because of a drier, warmer climate, we may see areas that were once forested will be open meadows now.

"There's definitely a change in the landscape."

The plan notes the fire also revealed more than 70 new archeological sites and expanded 170 known sites in the area that burned.

"It was a really good opportunity for some of that archeological work to be done," Marshall said.

"We've been able to involve our nearby Indigenous communities, in particular members of the Blackfoot Confederacy — the Kainai and Piikani — in looking at that landscape and seeing it in the context of their traditional knowledge of the use of the place."

Marshall said they continue to work with the communities to document the sites, which the plan suggests will be complete by 2025.

Overall, he said, the new management plan shows the agency's ongoing commitment to protecting the park.

"It deals with the fire," said Marshall, "but it also deals with our day-to-day operations related to visitation and how we manage the ecological and cultural integrity of the place."

As Musk is learning, content moderation is a messy job

Since the world's richest man paid $44 billion for Twitter, the platform has struggled to define its rules for misinformation and hate speech, issued conflicting and contradictory announcements, and failed to fully address what researchers say is a troubling rise in hate speech.

Peel police are searching for a murder suspect who was last seen running away from a Missisauga gas station.