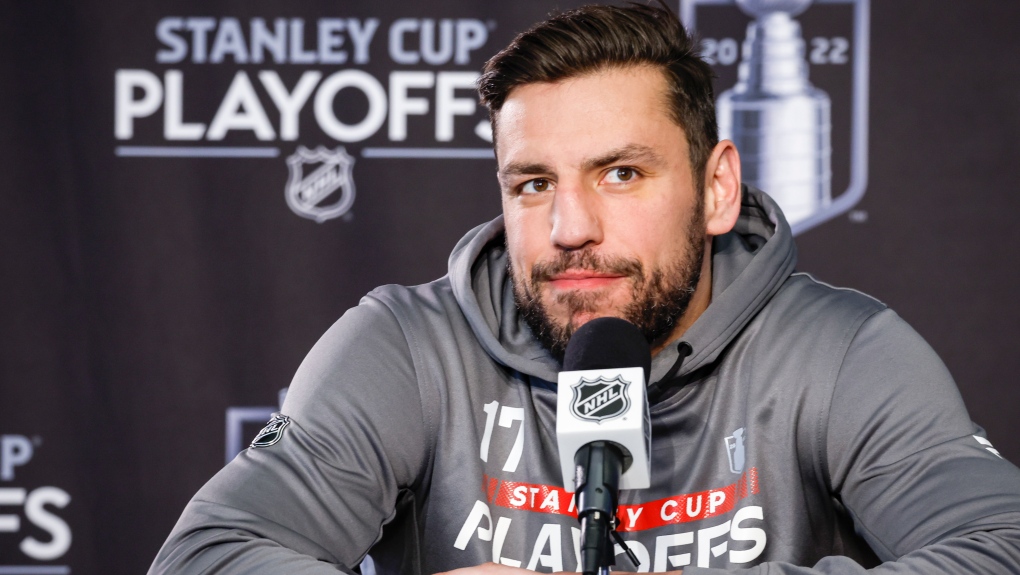 Calgary Flames forward Milan Lucic speaks at a during a media availability in Edmonton, Monday, May 23, 2022 (The Canadian Press/Jeff McIntosh).
EDMONTON -

Milan Lucic and his head coach are on the same page - the situation could have been a whole lot worse.

The bruising Calgary Flames forward was assessed a five-minute major and ejected from the third period of Sunday's Game 3 loss to Edmonton after barrelling into Oilers' goaltender Mike Smith.

Lucic appeared to try and let up on the play, but still sent the veteran netminder flying with Calgary trailing 4-0.

“They called it charging, correct?” Flames bench boss Darryl Sutter said following a 4-1 Edmonton victory that pushed the Oilers ahead 2-1 in the best-of-seven series. “Could you imagine if (Lucic) did charge, what would have happened there? He actually tried to slow it down a little bit, I think.

“It is what it is. It was the score and who it was. That's what they called.”

Lucic, who once levelled Buffalo Sabres goalie Ryan Miller as a member of the Boston Bruins more than decade ago, chose his words carefully when speaking with the media Monday, but echoed Sutter's overall thoughts.

“I wasn't trying to hit (Smith)I was breaking,” said the 33-year-old, a hulking six foot three and 231 pounds. “I don't think I really want to get into what I was thinking or what I was trying to do or if he sold it or if he didn't.

“But I think I agree with Darryl in the sense of, if I actually did charge we both wouldn't be playing (in Game 4).”

Lucic added later the Flames, who finished atop the Pacific Division before besting the Dallas Stars in seven games in the opening round, need to take a step back after consecutive performances that weren't up to their standard following a 9-6 victory in Game 1.

“This is a good time to just decompress,” he said. “And realize that it's great to be in second round of the playoffs, playing the Battle of Alberta.

“Take a few deep breaths and just soak it all in and enjoy it.”

A Quebec woman said she was very surprised to find her stolen Audi had been used in what’s being described as an “absolutely insane” Ontario mall theft.