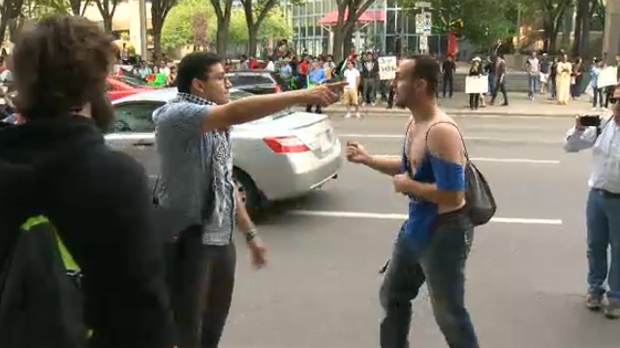 An argument between two men during a July 18, 2014 Gaza demonstration along Macleod Trail near city hall

Calgary police have arrested and charged an 18-year-old man in connection to an alleged assault along Macleod Trail. S.E. during a clash between Palestinian and Israeli supporters.

On the evening of July 18, a number of altercations occurred between members of the two sides.

On Wednesday, CPS detectives arrested and charged 18-year-old Kamaal Maxamud Jaamac with one count of assault in connection to the assaults.

Jaamac is the fourth person to be charged in relation to the events during the demonstration of July 18. He is scheduled to appear in Calgary Provincial Court on September 16, 2014.

Police continue to search for an unidentified person of interest who was photographed during the demonstration.

The man is described as having:

On the night of the demonstration, the man, who speaks with an accent, was wearing a white T-shirt with the Dulux logo. The man’s clothing and hands were stained with white paint.

Anyone with information about the person of interest’s identity is asked to contact the Calgary Police Service, 403-266-1234, or Crime Stoppers.