AFTERNOON UPDATE: A (slightly more) mixed bag, with few change of note. Our only change to the fire ban page (link in the morning edition, just below) is the addition of Kneehill County to the ban layer; meanwhile, the town of Three Hills has been under said ban for days and days. The only mix we're adding here is a little extra cloud. There's a chance for thundershowers tonight... but that's it for now.

Later down the line, as the week progresses, there's likely to be another storm risk. That day hasn't come yet, though.

MORNING EDITION: The coming forecast is hot once again.

A heat warning remains in effect for Calgary and with good reason; our temperatures are apt to slip back to the 30 C mark by the weekend.

The ridge of high pressure associated with this is colossal. While Alberta's fire ban picture hasn't changed, much, dry weather continuing might put a not-so-literal damper on campfires for the next week or so. 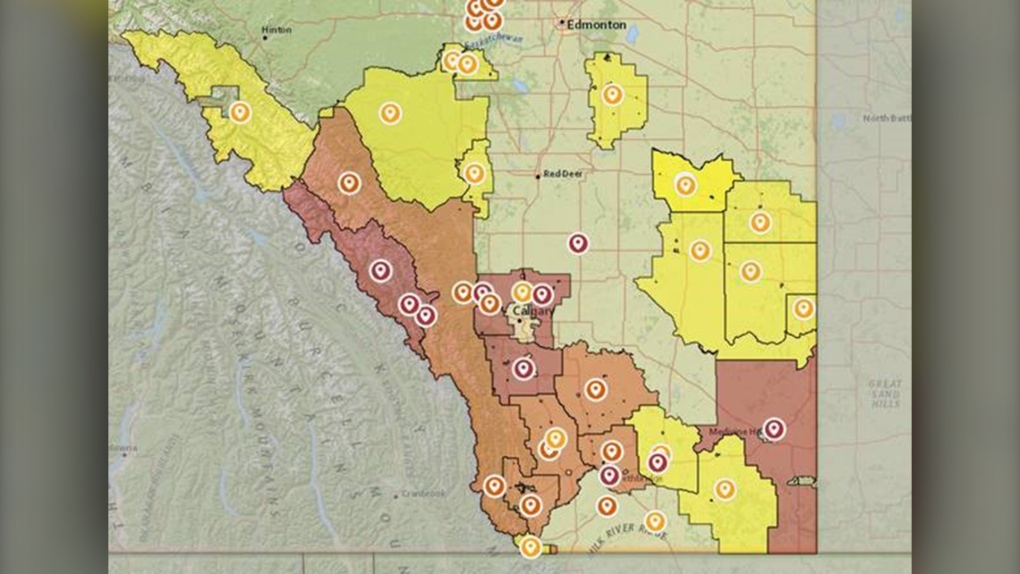 There is a low possibility for scattered thundershowers Monday evening, in spite of the largely sunny weather. Ditto for Tuesday, though add a slight enhancement, there, as central Alberta gets another wave of potentially-severe weather; Calgary is the southern edge, and precipitation amounts leave plenty to be desired for farmers.

Calgary's average precipitation through the month of August is around 55 millimetres; at the moment, we're at a mere ten per cent of that.

With the onrush of west wind Tuesday generating storms, another local impact we'll watch for is smoke from the B.C. wildfires. Calgary sits at a lower risk Monday, but could hit the moderate levels in the next 24 hours.

For the pic: A cool shot today from Friday's storms near Cremona, sent by MacFarquhar Farming:

You can send your pictures to CalgaryWeatherPics@bellmedia.ca

Canadian Prime Minister Justin Trudeau took a plunge this weekend when he decided to throw caution to the wind and go bungee jumping just outside of the Ottawa area on Sunday.

Quebecers are casting their votes Monday after a five-week election campaign. Incumbent premier Francois Legault's CAQ party has held a comfortable lead since the campaign began, but the battle for second has been tight between the four main opposition parties: Liberals, Quebec solidaire, Parti Quebecois and Conservative Party of Quebec.