Police say about 200 people were at Olympic plaza supporting Chu while nearly 300 were on the steps of city hall, waving signs and calling for his resignation. 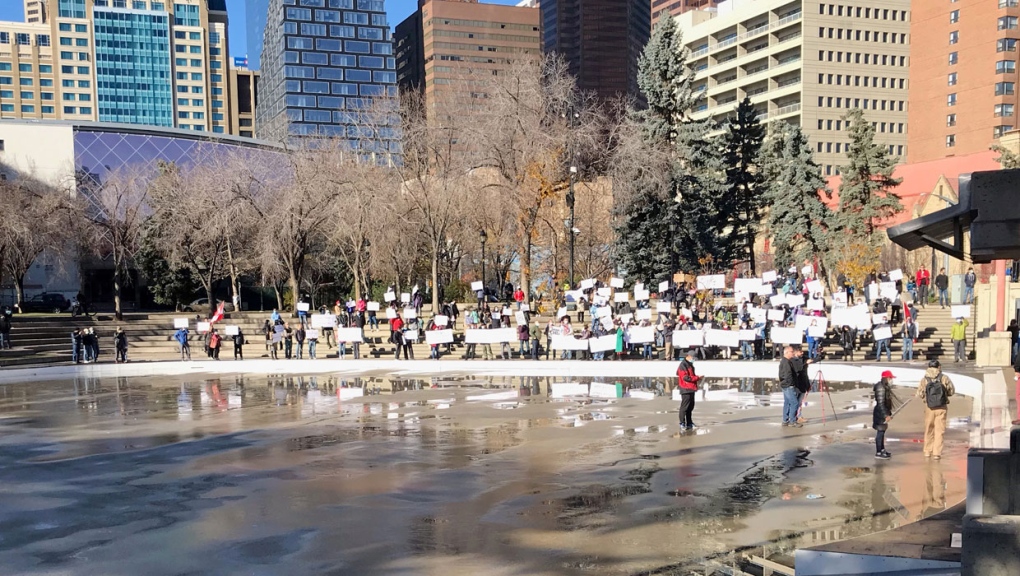 Chu has faced controversy since the election campaign after winning by a razor-thin margin of 52 votes over his competitor DJ Kelly.

Allegations of sexual assault involving a 16-year-old girl that occurred 24 years ago resurfaced just a few days before the Oct. 18 municipal election.

Chu, who was working as a Calgary police officer at the time, was not criminally charged but received a formal reprimand from the CPS.

“You’re trying to re-litigate something that happened 25 years, ago.. the man was cleared he has since served 2 terms,” said Les Baisi, a supporter of Chu.

Those wanting him to resign say Chu has not been forthcoming about his past.

“We can’t keep this system going, of non-accountability and the police doing whatever they want, and getting away with it,” said Nick Taylor.

“They live in a different world.”

His supporters admit he has made a mistake, but he paid for it through a reprimand on his file for five years.

“We all have been younger, or made a poor decision at some point in our life.”

'THIS IS CATEGORICALLY FALSE': CHU

Documents CTV News obtained last week show Chu admitted to caressing a girl’s leg at a public restaurant while he was doing a routine walk-through on duty as a police officer. He was reprimanded for five years for that incident.

Chu further stated that while off-duty and not in uniform, he participated in what he called consensual sexual foreplay with the girl in his living room.

New information to CTV News on Sunday revealed that the girl took the stand during the disciplinary hearing and denied the touching of the leg incident and instead focused on activities that occurred while Constable Chu was off-duty. The presiding officer, Insp. Debbie Middleton-Hope said, “It’s her focus on relaying her evidence was directed on an aggressive, physical struggle at which time a gun was held to her head.”

Middleton-Hope said she felt the girl’s account was inconsistent and that the girl “had difficulty in recalling pertinent details. I find her evidence not to be believed and I was not able to consider her evidence while deciding on a sentence.”

In a press conference Thursday, Chu addressed the gun allegations.

“This is categorically false and I was questioned on this point in the polygraph. In fact, I left my service weapon in my locker at work as was my usual practice,” he said.

“People who are terrified often zone out or check out and they can’t remember details,” said Shannon Smith, a protester calling on Chu to resign.

Information to CTV News states Chu met the girl at the Husky House. Although Chu admits in the disciplinary hearing he met her at a restaurant, he has maintained that he was at the Kings Head pub, a licensed establishment where customers need to be 18, and therefore he assumed the girl was older.

In the disciplinary hearing, Middleton-Hope stated that several witnesses thought the girl appeared to be 19 to 21 years old and said, “I have no evidence before me that indicates Constable Chu was aware of this fact.”

However, according to Canadian law, a 16-year-old can’t consent to sex with a person in a position of authority over them, like a police officer.

Doug King, a justice studies professor at Mount Royal University, spoke to CTV News on Friday and says, under the consent law, no one can offload the responsibility of confirming age to someone else, like a bouncer at a bar.

“You can’t legally say it’s an 18-plus establishment, so, therefore, I assumed everyone in there was over the age of 18, therefore, I don’t have to have an active role in checking consent,” Kind said.

In the transcript, the girl also told the hearing she had previous dealings with Const. Chu when she was involved in an altercation at school.

At the press conference Thursday, CTV News asked Chu if he had met the girl before.

However, the transcript revealed that while Const. Chu didn’t complete the investigation into the school altercation, he admits to speaking with the victim on the telephone and received a Christmas card from her as a result of that phone call.

Middleton-Hope concluded that “no evidence was presented that Const. Chu was aware of her age from this verbal contact.”

The LERB documents from 1999 also show that the girl had been appealing the matter over the course of nine years. She had filed a complaint against the officers who investigated her allegations, claiming there was misconduct and a “general coverup.”

One of the complaints was that she agreed to a polygraph test but when she called two days before the scheduled date and time, it was cancelled without reason and never rebooked by CPS. The decision in the document from 1999 indicates her complaints against the officers were dismissed.

He also said since this incident occurred, the procedures have evolved and if the incident were to happen today, the province would be notified and the police watchdog would conduct an independent investigation.

'IT IS FRUSTRATING': MAYOR-ELECT

The majority of his new city council colleagues have all called on Chu to resign, including mayor-elect Jyoti Gondek.

Gondek says she was proud to stand shoulder to shoulder with survivors of sexual harassment and assault.

“It is frustrating to be denied the tools to do what is right,” Gondek said.

“I feel that we were first let down by a culture that ignored victims' voices, and now by a legal structure that removes the levers of power from City Council and the Mayor's Office.”

Chu is adamant he will not resign but says this will be his last term on council.

A swearing-in ceremony will be held on Monday.