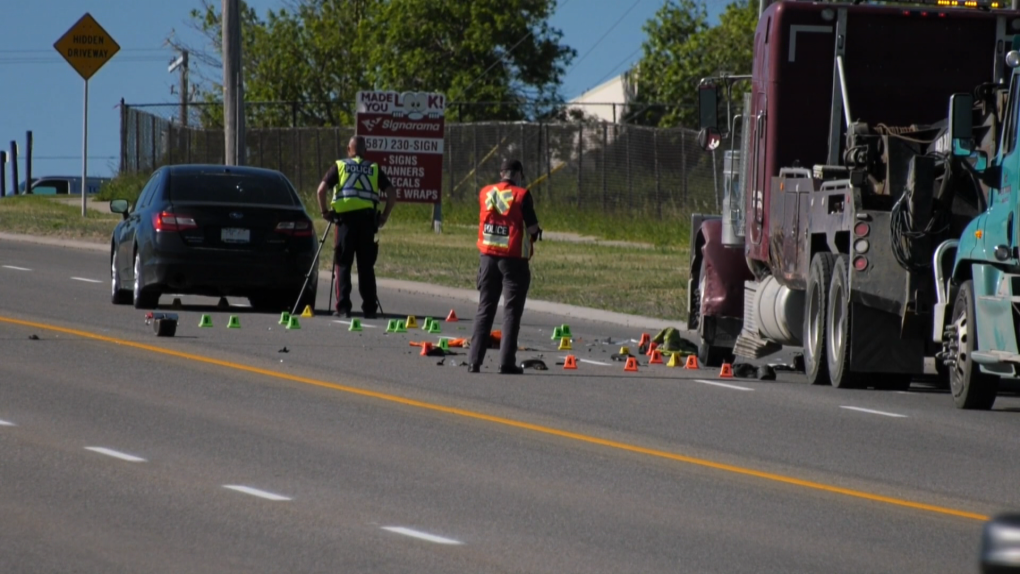 CPS members at the scene of Wednesday morning's collision where a car hit a tow truck operator along 11th St. N.E.
CALGARY -

Calgary Police Service is looking at whether impairment was the cause of a crash that sent a tow truck driver to hospital in serious condition and any witnesses are asked to come forward.

A tow truck was parked in the southbound lane of 11th Street N.E. in the Skyline East Industrial Park about 5:45 a.m. Wednesday and the driver had gotten out to recover a broken down vehicle.

A black 2017 Subaru Legacy, driven by a 28-year-old man, was headed south on 11th Street N.E., and collided with the tow truck, pinning the driver between the vehicles.

The tow truck driver was transported to hospital in life-threatening condition and was listed in stable condition Thursday morning.

The driver of the Subaru was treated at the scene by EMS and transported to hospital for precautionary reasons.

Police are looking at driver impairment as a possible factor and anyone who was in the area at the time, or who may have seen the Subaru leading up to the collision, is asked to contact investigators at 403-266-1234.

"Tow truck drivers and emergency workers deserve safe working conditions while they get you the help you need, when you need it. As a driver, it is your duty to ensure the safety of those around you while on the road. Slow down, move over, watch out for us and each other," said Sgt. Colin Foster of the CPS traffic section.