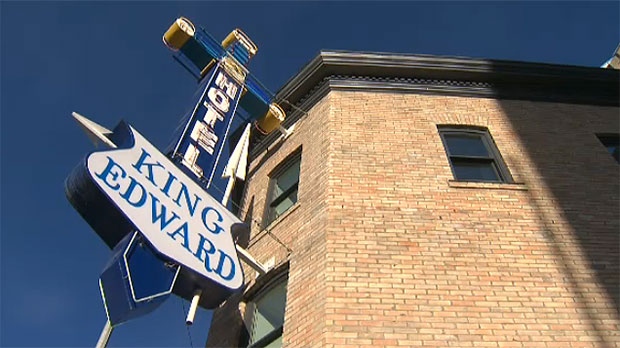 The Bell Live Series at the King Eddy runs daily from July 8-17.

One of the oldest blues bars in the country will soon be back in business after a 10 year hiatus and will be transformed into a pop-up country bar to celebrate its reopening during Stampede week.

The King Eddy Hotel was known as ‘the House of the Blues’ in its heyday and hosted many music greats like Otis Rush and Buddy Guy.

The old hotel in Calgary’s East Village was built in 1905 and closed in 2004 after a number of years in decline. It was acquired by the National Music Centre and would become the anchor of its new facility.

The National Music Centre broke ground on its expansion project in 2013 and the King Eddy was taken apart brick-by-brick and reassembled as part of that restoration.

The building is now the largest artifact in the NMC collection and live music will return to the venue when it hosts The Bell Live Series at the King Eddy over the 10 days of Stampede.

“This is it. The party starts July 8th. This is going to be the first bit of live music in this building for ten years,” said Jason Valleau, Public Programs Coordinator, Studio Bell, NMC. “We have quite an interesting lineup of artists, mostly from Alberta, there are a few wildcards in there as well.”

“The great thing about where Studio Bell is located is we’re a block and a half to one of our most greatest and powerful allies, the Calgary Stampede, so we encourage people to make this part of their programming day when they’re out enjoying the Stampede. We’re a hop, skip and a jump and it’s not just the King Eddy that we offer, our Studio Bell exhibitions are fantastic,” said Valleau.

“Tickets are going to go fast. Our capacity is not very large, we can only really fit about 185 people into this space so we encourage people to get to StudioBell.ca right away and book tickets,” said Valleau.

For more information on events and tickets, click HERE.