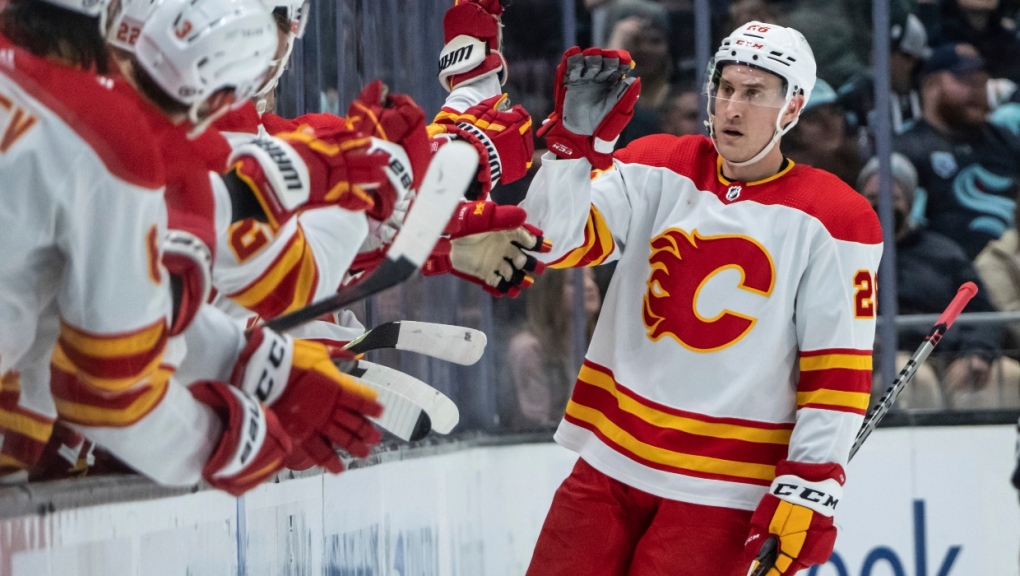 Calgary Flames defenseman Michael Stone is congratulated by teammates on the bench after scoring a goal during the second period of an NHL hockey game against the Seattle Kraken, Saturday, April 9, 2022, in Seattle. (AP Photo/Stephen Brashear)

He watched far more games than he played this season, but Flames defenceman Michael Stone came out of the press box to make an impact in the playoffs for Calgary.

Calgary was one of the healthier NHL teams in 2021-22 and Stone, the No. 7 defenceman on the depth chart, was rarely activated to fill in on the back end.

The 31-year-old from Winnipeg appeared in just 11 regular-season games and sat the first three of Calgary's first-round playoff series against the Dallas Stars.

Flames head coach Darryl Sutter opting to go with seven defencemen and 11 forwards in Game 4, instead of six and 12, was Stone's opening.

The six-foot-three, 210-pound defenceman put a combined 17 shots on net and contributed a goal and two assists over the next four games as Calgary closed out the series in seven.

Stone averaging just under 15 minutes a game, including two minutes per game of power-play time, eased the workload of his teammates.

"I come to work every day and whatever is needed from me, I'm hopefully there to provide that,'' Stone said. "I was given an opportunity to play in the last series and I just wanted to make the most of that.''

Stone has a sense of occasion. His seventh game of the regular season April 6 was his career 500th. Stone's game-winner was his first goal of the season and he also had an assist in a 4-2 win over Anaheim.

He's extended his career by being ready to make an impact in the few opportunities and limited minutes he gets.

"I think it's probably the hardest role to have on the team,'' Flames forward Milan Lucic said. "When Stoney came in the lineup, it gave us an energy boost and he provided us with that.

"He had eight shots in his first game and was a difference-maker the whole series every time he came in.

"He has a lot of respect from us as a group, and the work and time he's put in to keep himself ready. When he's come in, he's always provided us with energy and quality minutes. We trust in him and know he's going to continue being a great player for us.''

Calgary bought out the last year of his contract in August of 2019, but then resigned him a month later to the league minimum when Juuso Valimaki suffered a long-term knee injury.

"The first conversation was a little unique. 'Hi Mike, remember me?''' Flames general manager Brad Treliving said at that time.

Stone, who spent his major junior career with the Calgary Hitmen, agreed to return to the Flames because he didn't want to uproot his young family to play elsewhere.

He continued to sign for the league minimum with the Flames to play mostly an understudy role.

Stone was injured and didn't play when Calgary lost out in the first round in 2019.

He didn't appear in any playoff games in Edmonton's playoff bubble two years ago, so Stone's getting his first playoff reps since 2017.

He acknowledges his career has taken an interesting path.

"I would say it's probably a unique one that not many would be taking,'' Stone said. ``I don't think anybody, myself included, stopped believing that I could be a difference. It just took awhile.''

This report by The Canadian Press was first published May 18, 2022.