'People are fed up': convoy of trucks converges on Ottawa as police prepare for thousands on Parliament Hill

A convoy of hundreds of fed-up Canadian truckers are driving cross-country, heading for the nation’s capital to deliver a message that's raising millions of dollars from donors around the world.

The ‘Freedom Convoy 2022’ movement is pushing for an end to a cross border vaccine mandate implemented by both the federal government and the U.S. administration.

Organizers say it is also calling for the end of all mandates for the vaccine.

“This is about mandating freedom,” said organizer Tamara Lich in a Facebook video.

“This is about making sure our children and our grandchildren live in a free country.”

A crowd-funding campaign has raised nearly $6 million in funds from around the globe, with close to $1 million being raised daily.

‘Families for Choice,’ a Calgary-based group advocating for families to choose whether to vaccinate their children or not contributed $3,000 to the event.

“We’re two years into this thing, and people are fed up,” said co-founder Cathryn Carruthers.

“They (the truckers) are representing all of us they are giving us a voice and they are taking direct action, something tangible that everybody can get behind, (and) we were absolutely thrilled to get behind that.”

The group started with five mothers in October 2021, with its membership exploding to more than 20,000 families since. 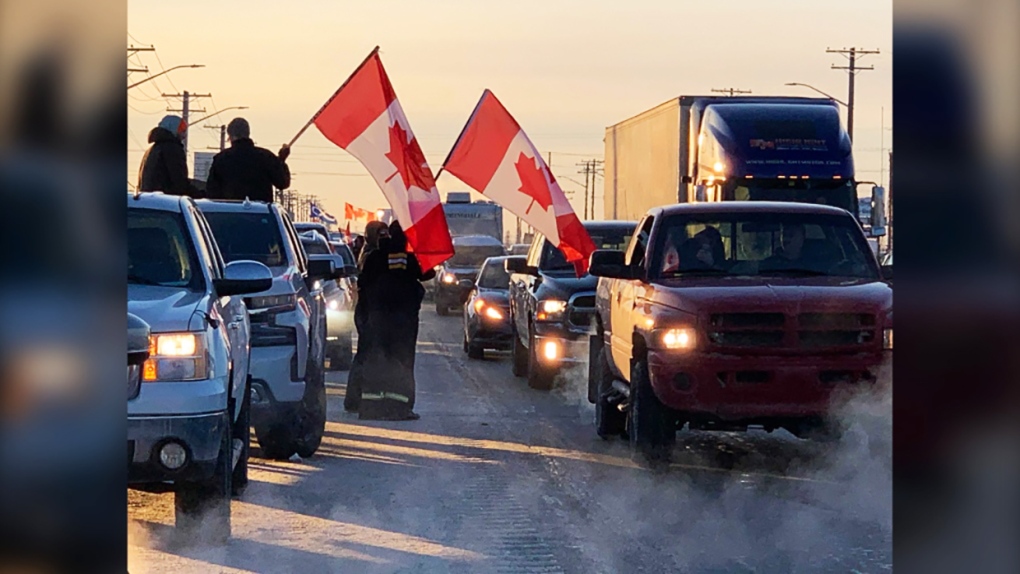 A crowd-funding campaign has raised nearly $6 million in funds from around the globe, with close to $1 million being raised daily.

One political scientist says this protest has become bigger than just an anti-vaccine mandate for truckers.

“I do think this is like a prairie fire,” said Christopher Adams.

“When people feel left out of the national arrangement of power we do see uprising.”

The convoy rolled through Manitoba on Tuesday, with the group making its way into Ontario on Wednesday.

Adams believes there has also been an erosion of trust with political leaders, spurring many into action.

“I would be very surprised if one percent of the people part of this convoy or those coming to see the convoy, vote Liberal at all in federal elections.”

Prime Minister Trudeau commented on the convoy Wednesday afternoon, describing them as a "fringe minority."

"The small fringe minority of people who are on their way to Ottawa are holding unacceptable views that they're expressing do not represent the views of Canadians," Trudeau said, "who have been there for each other who know that following the science, stepping up to protect each other is the best way to continue to ensure our freedoms, our rights,our values as a country."

Ottawa Police Service spoke with city council on Wednesday saying it is preparing security and surveillance plans for the convoy’s ultimate arrival this weekend.

“Our interactions with freedom rally organizers indicate that this will be a significant extremely fluid event that could go on for a prolonged period,” said Inspector Trish Ferguson.

The police chief said the department has already come under siege from counter protesters.

“I can tell you that within the last 24 hours, the Ottawa Police Service received a direct threat from a counter protest source, to the safety of our officers and to the facilities in which our civilian members and officers work in,” said Chief Peter Sloly.

“When we push back against the insanity, we can win,” he said to nearly five million Facebook followers.

Ottawa Police said early Wednesday afternoon that they expect to see about 1,000-2,000 people on the ground during the day Saturday, but expected that number to change by the end of the day, with a more firm estimate known on Thursday.

Beijing stepped up quarantine efforts to end its month-old COVID outbreak as fresh signs of frustration emerged in Shanghai, where some bemoaned unfair curbs with the city of 25 million preparing to lift a prolonged lockdown in just over a week.

Conservative party ends its investigation into complaint about a racist email

The Conservative Party of Canada says its ended its investigation into a racist email sent to leadership contender Patrick Brown's campaign team after the party member purportedly behind it resigned their membership.