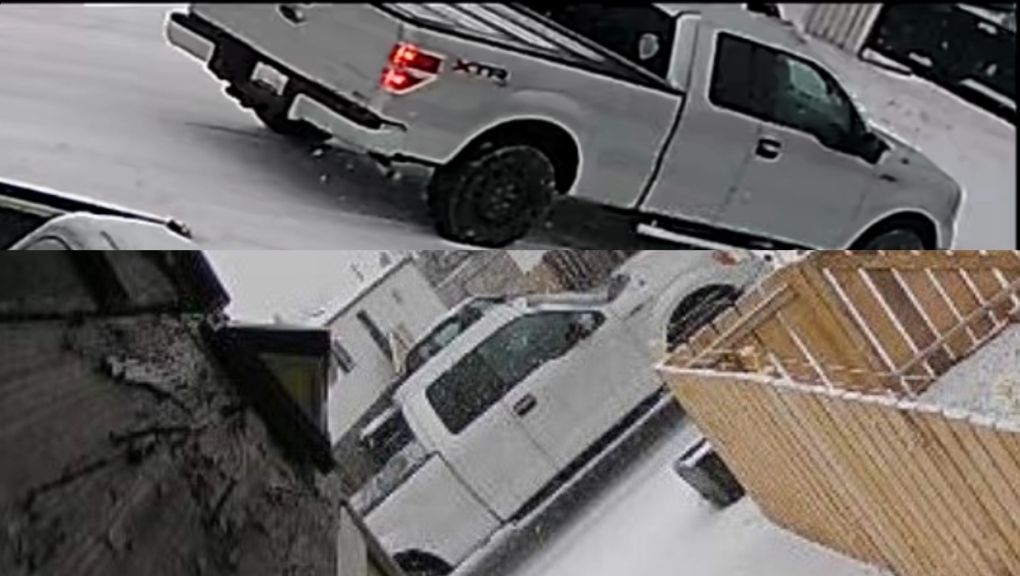 Sundre RCMP are hoping the public can help them track the movements of a silver F-150 believed to be connected to an armed home invasion. (RCMP handout)

Sundre RCMP is searching for suspects after an armed home invasion on Wednesday.

Officers were called to the Sundre Mobile Estates area just before noon.

Police said three suspects with weapons forced their way into a residence, robbing the man and woman inside.

The victims weren't injured in the incident.

Police allege the suspects then left in a black 2016 Hyundai Elantra they stole from the victims.

The vehicle was later spotted travelling eastbound on Highway 27 toward Olds at around 12:10 p.m., and then found abandoned in Olds.

Though investigators weren't able to locate the suspects, officers did recover a shotgun, knife, and stolen pellet rifle from the Elantra.

"Further investigation revealed surveillance video in the area of the home invasion in Sundre that showed a silver F-150 arrive just prior to the incident and then depart with the stolen Hyundai Elantra," RCMP said in a Thursday news release.

The F-150 is described as having black wheels, a black Tonneau cover and decals on each side of the back window.

Investigators are asking people to check their dash cams or home security cameras in case they have footage from the Sundre Mobile Estates area between 11 a.m. and noon on Wednesday, or 50th Avenue and 46th Street (Highway 27) in Olds from 12:10 p.m. until 1 p.m.

Anyone with information is asked to call the Sundre RCMP at 403-638-3655 or to contact Crime Stoppers anonymously.