The protests, taking place across Canada, are in response to what the group claims to be 'medical tyranny and government overreach.'

Organizers say they're against mandating COVID-19 vaccines to members of the public, health-care workers and other workplaces, and believe in restoring freedoms and rights as Canadian citizens.

The event was part of what protest attendees refer to as the 'National Health Freedom Movement.'

'WE ARE HEADED FOR CAMPS'

“We know where we are headed as the unvaxxed, we are headed for camps and we’re standing for the freedom of every Canadian,” said protester Trevor Simpson.

Simpson said he believed that everyone has a choice to take the jab or not, but it should not be mandated by governments or workplaces.

He said many healthcare workers are being forced to receive the vaccine.

One woman who attended the protest, did not provide her name, but says she’s a retired unit clerk at FMC.

“They are not allowed to speak, we’re only allowed to say one point of view and I don’t think that’s right,” she said.

“Because in a democracy we should all be able to have a debate and talk about these things.”

Douglas Ferguson said he believes unvaccinated people are being segregated within society.

“You have to comply or you’re ostracized and thrown off to the society and (it)becomes an apartheid society,” said Ferguson.

Registered nurse and nurse educator at Macewan University Elly O’Greysik says now is not the time to be protesting vaccines.

“It causes a lot of anger when you find out that you have an unvaccinated patient," she said.

"It's been really hard to grasp that people have an opportunity to stay well," she added, "and that they're not taking it."

In a statement to CTV, the Calgary Police Service said it was aware of the protests and planned to have officers on site.

“While we respect the rights and freedoms for a peaceful protest, we will not tolerate any actions that impede the entrance or exit of patients or staff,” CPS said in the statement.

“We are working with the protest organizers to lay out these expectations and we are also liaising with AHS as well as staff at the Foothills."

Alberta Health Services, meanwhile, said it was "extremely disappointed" with the protests.

"We have no tolerance for intimidation or bullying of our patients, AHS staff or physicians, and find such behaviour abhorrent," AHS said in a statement to CTV.

"We are working closely with police and AHS Protective Services to ensure the safety of patients, physicians and staff.

"Additional Protective Services staff will be at the impacted hospitals to monitor the protests and respond as needed, including supporting staff and patients entering and exiting the facilities."

AHS said fencing has been put up to protect patients, staff and physicians.

"Our healthcare workers are doing all they can to care for Albertans, and they deserve the utmost respect and support.

'BLOCKING AN AMBULANCE IS MOST DEFINITELY NOT PEACEFUL PROTEST': KENNEY

Premier Jason Kenney said the right to peaceful protest is not without limits.

In a statement, Kenney said Monday's protests must in no way obstruct the operations of hospital, including the arrival and departure of emergency vehicles and workers.

"Blocking an ambulance is most definitely not peaceful protest," Kenney said.

“In Alberta, local law enforcement is fully empowered to enforce the law in a timely fashion, including the potential use of the Critical Infrastructure Defence Act. 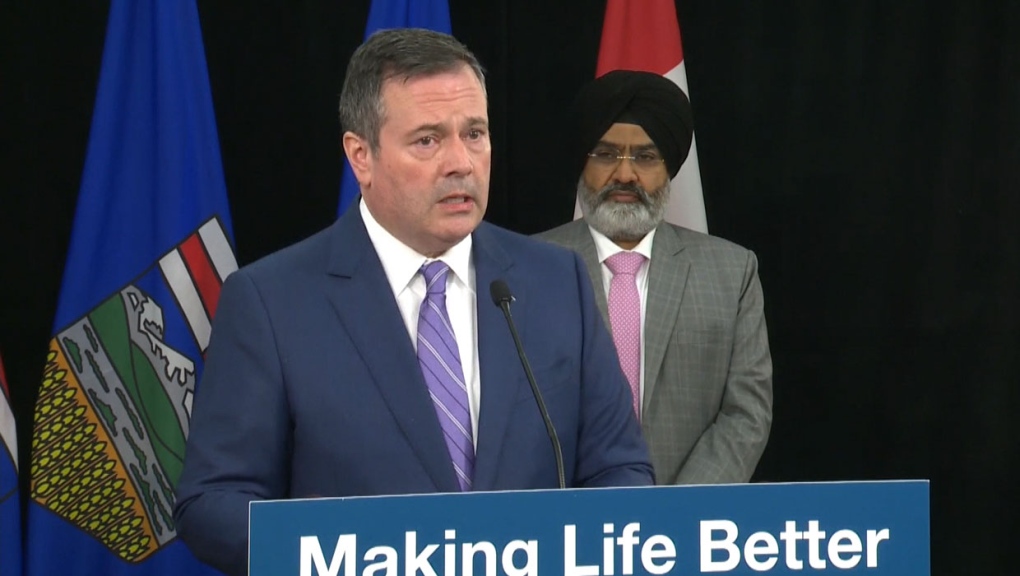 “While Canadians are entitled to peaceful protest, one can still question the appalling judgment of those protesting across the country today.

"It is outrageous that a small minority feel it’s appropriate to protest at hospitals during the pandemic while our health-care workers continue to tirelessly battle the global menace of COVID-19.”

"If you oppose masking, vaccinations, or any other measures taken to prevent COVID-19 transmission, that is your right, but to target healthcare workers with anger and vitriol is not acceptable, particularly now," AHS said.Alberta Justice Minister Kaycee Madu tweeted his opposition to the protests, adding he expects police to intervene, if necessary.

"All Canadians have the right to peaceful protest, but I cannot disagree more strongly with those protesting at hospitals today," said Madu.

All Canadians have the right to peaceful protest, but I cannot disagree more strongly with those protesting at hospitals today. 1/3 #ableg

"I trust law enforcement will take all necessary action to ensure healthcare operations are in no way impeded, up to and including potential use of the Critical Infrastructure Defence Act."