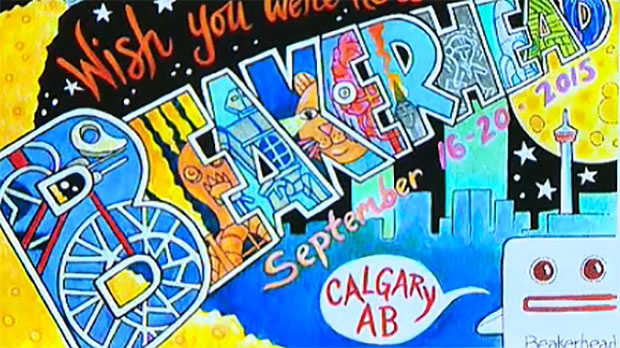 Beakerhead showcases the creative sides of engineers and the technical side of artists.

A smash up of science, art and engineering will turn the city into a giant laboratory in the fall and this year’s Beakerhead event is shaping up to be bigger and better than ever.

Officials launched the lineup for this year’s spectacle at an event on Wednesday and say the centre of attention will be at Station B at Fort Calgary on Opening Night.

“This year during Beakerhead we’re trying to permeate science and art across the city so we have six installations throughout the downtown core, but the starting point, where I would say everyone should go, is at Fort Calgary. We’re going to have a massive, I might almost say, the world’s largest sandbox, that’s going to be anchored by towers of scaffolding, it’s a massive playground for all ages accompanied by a 30 foot Claw arcade game ,” said Jasmine Palardy, Director, Programs and Partnerships, Beakerhead.

It’s the third year for the Calgary-born event and organizers say the five-day festival has something for everyone.

“We’ve condensed a little bit of the programming geographically to some of the inner areas of Calgary and kind of created them as walkable and bikeable connections to each other so if you look at the Beakerhead program this year. You’ll see something called ‘A String of Incredible Encounters’ and that’s where you can hit six really easily accessible areas and take in almost all things Beakerhead,” said Palardy.

Here’s a look at this year’s lineup, in addition to Station B:

Beakerhead runs from September 16 – 20 and most events are free.