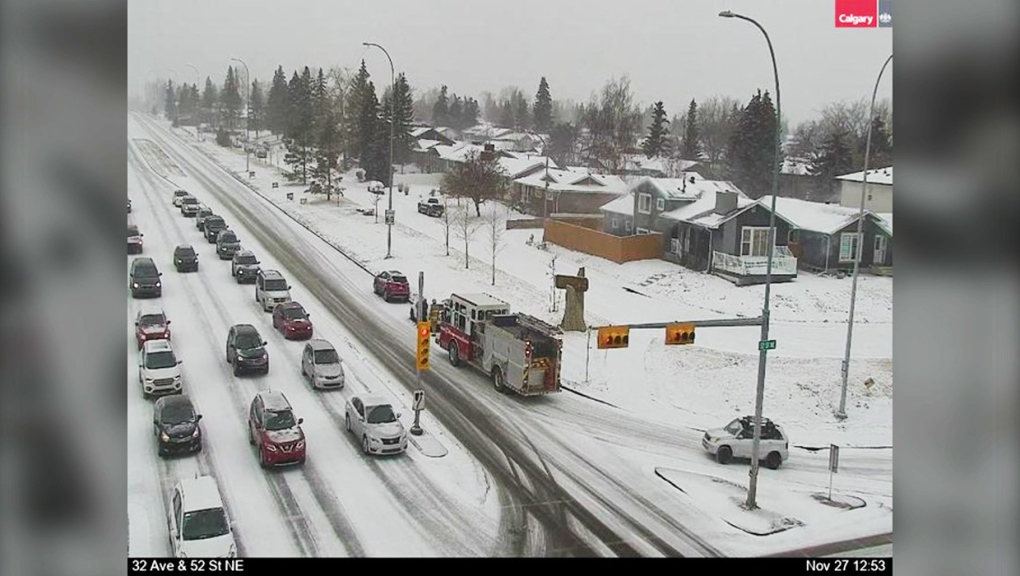 A two-vehicle collision blocked the right-hand lane at 32 Avenue and 52 Street N.E. Sunday around 1 p.m., as a snow squall watch was issued for Calgary by Environment Canada

"An intense cold front is bringing a band of heavy snow and strong winds to southern Alberta," it said, continuing.

"Snow squalls cause weather conditions to vary considerably; changes from clear skies to heavy snow within just a few kilometres are common. Travel may be hazardous due to sudden changes in the weather. Visibility may be significantly and suddenly reduced to near zero.

"Snow squall watches are issued when conditions are favourable for brief but intense bursts of heavy snow producing near zero visibilities."

The city issued a press release shortly after 12:30 p.m., saying that snow-clearing crews have been deployed and are applying material and plowing major routes across the city.

Flurries were originally forecast to end shortly after noon, but according to the city, are now expected to continue into Sunday evening.

Motorists were reminded to monitor evolving weather forecasts and to leave plenty of time to reach your destination.

Just before 1 p.m., @YYCTransportation tweeted that a two-vehicle collision at the intersection of westbound 32 Avenue and 52 Street N.E. was blocking traffic in the right-hand lane.