Stampeders defensive lineman Folarin Orimolade is going with the Flo

Stampeders defensive lineman Folarin Orimolade is going with the Flo

Defensive lineman Folarin Orimolade goes by 'Flo' in the Stampeder locker room. And Flo was going with the flow on Saturday night against the B.C. Lions., where he was outstanding in a heartbreaking 41-40 loss.

The highlight came when the 26-year-old intercepted a Nathan Rourke pass and took it to the house.  Orimolade said it was the first touchdown he's had since his high school days.

"I didn't know it was going to feel that good.  It actually felt really good to get into the end zone," Orimolade said.

"I was supposed to cover the middle of the field but nobody came to the middle.  I got a drag coming back from the other side so I was out leveraging it but the drag guy stopped and I saw the quarterback who thought he was still going to go so I just went where his eyes went and the ball just popped up."

THE SECRET IS OUT

Orimolade's teammates weren't surprised he stepped up and made the big play.  Earlier this season, fellow defensive lineman Sean Lemon called Orimolade the best kept secret in the CFL.

He said that's not the case anymore.

"I'm just so happy for him you know what I mean.  I understand the work that he puts in.  He's like a little brother to me and I'm just proud of him.  I've been there, I've seen him injured and I've seen him crying in the locker room.  Hats off to the organization sticking with the guy, you know going through tough times but I'm just happy to see him thriving." 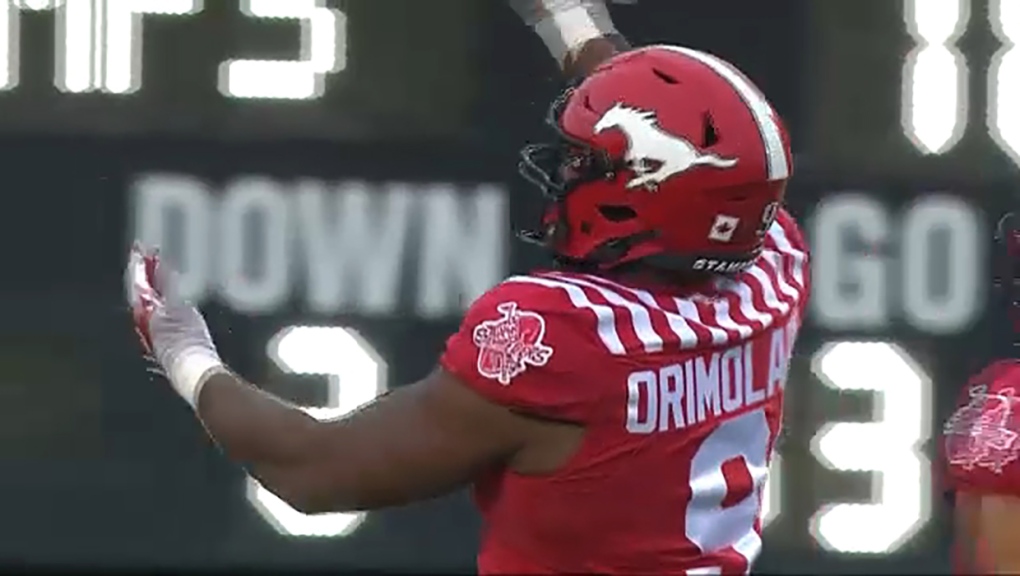 The 26-year-old intercepted a Nathan Rourke pass and took it to the house against the Lions Saturday, scoring his first touchdown since high school.

There were questions whether Orimolade would be able to thrive in the CFL.  He joined the team in 2018 but hasn't played in a lot of games.

In 2019, he suffered a quadriceps injury that kept him out the entire season.  In 2020, the season was wiped out due to the pandemic and then in 2021, Orimolade missed more than half the season with a high ankle sprain.

He said it's great to be back on the field again and making big plays.

"It's been a long journey.  Long knee rehab, two of them.  You know the ankle last year so it feels good to put a stretch together like this."

Head coach Dave Dickenson said the team stuck with Orimolade because they knew he was going to put the work in and do his best to get back onto the field.

"The main thing with Flo is you're never not going to get hard work," Dickenson said.

"You know the guy, practice roster, starter, all star he just shows up the same and he's not interested in just getting to the game.  He wants to work on his craft and he takes it serious.  Football is important to him."

Orimolade admits there were times he wondered if he was going to make it back.  There were plenty of set backs a long the way.

He said getting back on the field and making a difference makes it all worthwhile.

"Hard work does pay off but I think the thing is that you have to stick through it when you feel like you can't go any further, you always have more left.  And stay faithful that you'll be able to get through it."

Orimolade and the Stamps are in Toronto on Saturday night to face the Argos.  Kickoff for that game is at 5:00 p.m.