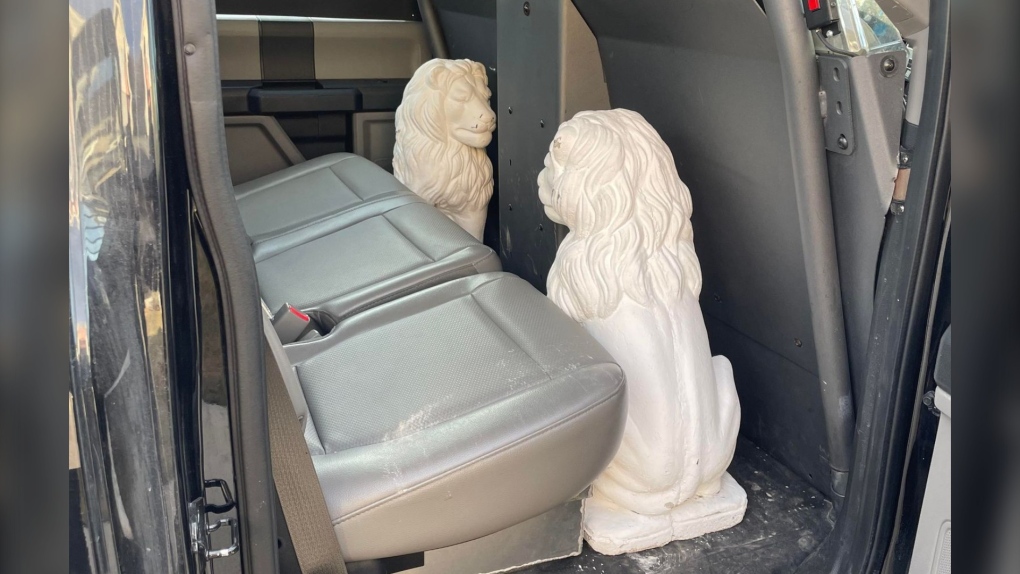 A pair of treasured, decorative lion statues stolen from in front of a Calgary home earlier this month are headed back where they belong after being discovered next to a dumpster.

Calgary police were notified about the two, metre-tall lions, weighing about 100 pounds each, on Thursday, and they were being returned to rightful owner Rebecca Pham.

"I started crying immediately, my mom and I were bawling," she said.

"The police called me and said, 'We think we found your lions' and they sent me a picture and it was my lions."

Pham said the lions were noticed about a week ago by someone living at the condo building, who at first didn't think much about them.

"They didn't put two-and-two together then they were talking with a friend and told them about the lions and the friend said, 'Hey, those were on the news.'"

The statues have adorned Pham's family homes in Ontario and now Alberta for nearly 30 years.

He dad acquired them in 1984, before Pham was born, and they were the only things salvaged after the family's home was destroyed in a fire that claimed the life of her older brother — who was 13 at the time — following the Ontario ice storms in 1998.

Rather than be put back where they were, Pham said she is going to move the lions to the back yard.

"There's a little bit of damage, some scuff marks and some paint missing, but nothing that can't be fixed," she said.

"Those lions are sturdy and strong. I feel so relieved, a weight has been lifted off my shoulders."

Ukrainian President Volodymyr Zelenskyy accused Russia of waging "total war," seeking to inflict as much death and destruction as possible as in three months of conflict, as fighting raged Tuesday in the eastern Donbas region.

Conservative party ends its investigation into complaint about a racist email

The Conservative Party of Canada says its ended its investigation into a racist email sent to leadership contender Patrick Brown's campaign team after the party member purportedly behind it resigned their membership.