'The guys are all pumped for it': Lethbridge Hurricanes ready for 'Toque and Teddy Toss'

'The guys are all pumped for it': Lethbridge Hurricanes ready for 'Toque and Teddy Toss' 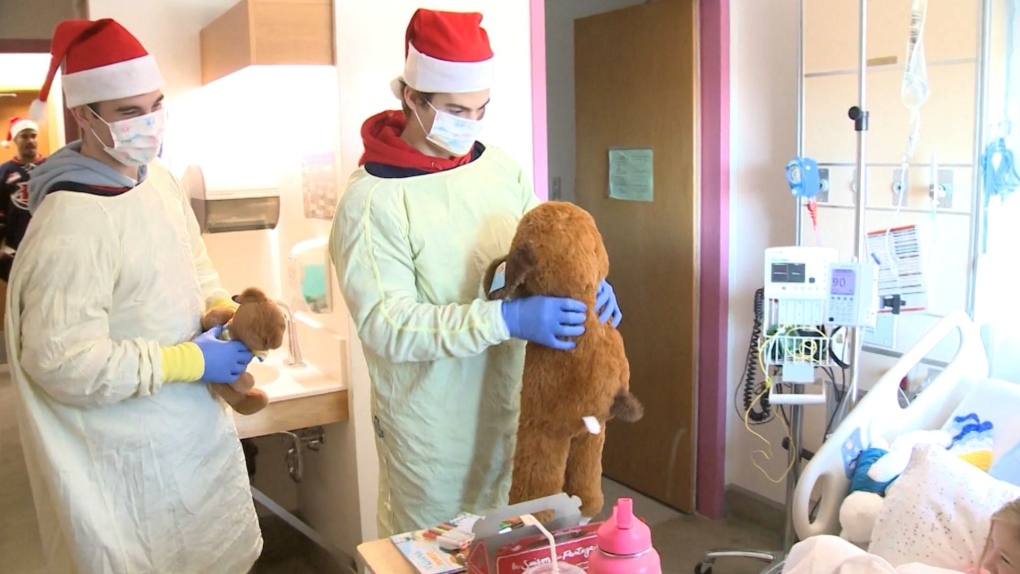 On Monday, Hurricanes players will head to the Chinook Regional Hospital to drop off all the donated toques and teddies and chat with patients and fans.
LETHBRIDGE -

The Lethbridge Hurricanes are excited to bring back their annual "Toque and Teddy Toss" for its 26th year on Friday, when they host the Medicine Hat Tigers.

It'll be the first time since 2019 they've had a full barn of fans for the event and they're looking forward to not only seeing who gets the big goal, but also what it gives back to the community.

"We have a lot of fun every season with this," said Kathy Hong, Hurricanes marketing and community liaison.

"It's fun trying to guess who's going to get the goal, how many bears we're going to collect and we're super happy to be able to support so many community charities this year, too."

"That's easily the biggest community event that the guys want to do every year," Hurricanes assistant coach Matt Anholt added.

"It's such an important time for the guys to get into the hospital or wherever they may be to drop off the teddy bears or the toques or the mitts."

The Toque and Teddy Toss is a fundraising effort for multiple local charities, including the Chinook Regional Hospital, Lethbridge Family Services and Blood Tribe Police and Emergency Services.

Fans bring toques, gloves and teddy bears in plastic bags to toss on the ice after the Hurricanes' first goal.

"Well, I wouldn't know what it's like but I've heard it's just fun being out there, taking pictures, jumping in piles of bears and stuffies, so I'm looking forward to that," said Hurricanes goaltender Harrison Meneghin, who'll be playing in his first toss at the ENMAX Centre.

Earlier this week, the Hurricanes asked players and staff who they think will get the big goal.

Six players chose centre Jett Jones, but he's got his sights on someone else.

"I said (Chase Pauls) in the video but he scored last game, so I'm going to change my answer and go Logan Wormald," Jones told CTV News.

Friday will be the first time since 2019 that they've had a full barn of fans for a Toque and Teddy Toss.

Despite it being a fun night for the team, it's also an important game with both coaches and players looking toward a win.

"Obviously, games against Med Hat are big games for us, this year especially when we have a big rivalry with them," said Meneghin.

"So, obviously, playing them on a teddy bear toss night is going to be huge, especially with fans in the rink."

"It's always a great game against those guys but it adds another level to it with that teddy bear toss game," added Anholt.

"The guys are all pumped up for it," said Jones.

"It's been pushing guys in practice this week, knowing that it's a big game coming Friday and to make it against Medicine Hat, that just makes it even better."

On top of getting a win, the Hurricanes are hoping to get around 5,200 teddy bears and 1,500 toques.

On Monday, Hurricanes players will head to the Chinook Regional Hospital to drop off all the donated toques and teddies and chat with patients and fans.

Friday’s game starts at 7 p.m., and some tickets are still available but are expected to sell quickly.