There was a long lineup of eager skiers and boarders at Nakiska’s opening day of the season Thursday morning, but behind the scenes management is facing a staff shortage.

Jan Sekerak, Nakiska's general manager, says the resort, like many in western Canada, is dealing with a lack of foreign workers and is currently operating with about 70 per cent of normal staffing for the opening.

"There is simply not enough Canadians interested in coming to do this job and this has been going on since summer," said Sekerak. "Summer business had the same issues when we slowly opened and now in the winter it’s very, very pronounced." 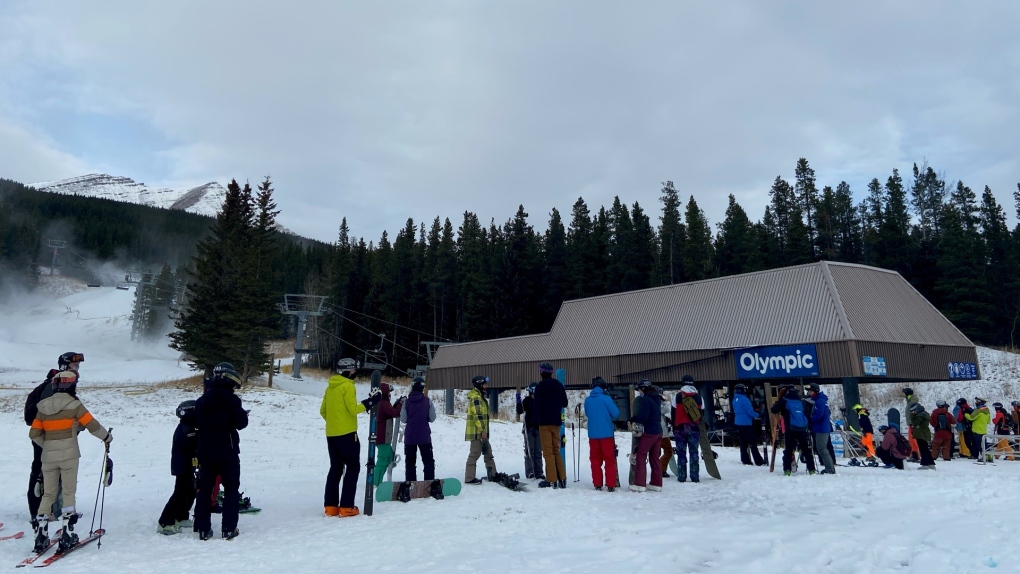 In a typical year, Nakiska hires 30 to 40 per cent of its workers from countries like Australia and New Zealand, but the ongoing challenges from the COVID-19 pandemic means those workers aren't coming to Canada.

"There's just no resumes coming in. You cannot make offers if there are no resumes. This time of year we typically have one person just sorting resumes and now we simply don't have the resumes.

"We’re trying what we can to advertise, to do any incentives for our staff and their friends to work with us, but it's not good."

Nakiska has a limited number of runs open on its upper mountain for its opening weekend but plans to be fully up and running by Nov. 27, though Sekerak isn't optimistic that the worker situation will be resolved by then.

"It’s not quick solution, this will take probably a good few months."

Nakiska is not alone in its challenge to recruit staff this season.

Mount Norquay, which kicked off its season with one chair on Nov. 5, says workers who left the country at the onset of the pandemic haven't been replaced.

"That’s where we really feel the pinch," said Andre Quenneville, Mount Norquay’s general manager. "It’s important that these young people can come back and work in a lot of these jobs in resort communities and in the tourism industry."

One of the key issues is linked to immigration and VISA delays for foreign workers.

Canada West Ski Areas Hotel and Lodging Association, which represents ski resorts in western Canada, is putting pressure on the federal government to speed up the process.

"We’ve got people who’ve applied in April, May and June that have gone through the process and all the documentation up to the last point and there has just been no response," said Christopher Nicholson, the association's president and CEO. "Our ask from the federal government is, for the winter applications, to help prioritize those."

Nicholson says the three key areas that are feeling the labour shortage the most — not only at western ski resorts but at resorts across the country — is ski school operations, food and beverage and hospitality room attendants.

Immigration, Refugees and Citizenship Canada says global migration has been upended by the pandemic and had a significant impact to its processing times.

In an email to CTV News, the ministry says applications have been prioritized for workers in essential occupations like health care and agriculture but it is currently working to expedite any backlogs.

"Ongoing international travel restrictions, border restrictions, limited operational capacity overseas and the inability on the part of clients to obtain documentation due to the effects of COVID-19 have created barriers within the processing continuum. This hinders IRCC's ability to finalize applications, creating delays that are outside IRCC's control."

Restaurants, retail stores and hotels in Banff are also struggling to recruit staff, with many ‘Hiring’ signs visible on the town’s main business strip, Banff Avenue.

Chris Barr is the general manager of Banff Aspen Lodge and the board chair of the Alberta Lodging Association and says some hotels are cutting back on housekeeping because they don’t have the staff for the service or because they want to make sure they have enough hours for the employees they have hired.

“In Banff as a whole it’s probably going to be the biggest problem coming up or already occurring right now with staffing shortages,” he says. “With some of the federal government’s programs like CERB just finished, will hopefully assist with allowing, hopefully having more workers come back to the hospitality industry.”

A lot of establishments in Banff have also increased wages but Barr says that isn’t always a sustainable option either with hotel occupancy still roughly 40 per cent below pre-COVID levels.

“We get some employees who are coming to the hotel and saying, ‘I’ll take the job but it has to pay $25 per hour for a frontline worker position,’ which is very difficult for hotels at this time.”

Many long time workers in the industry left during the pandemic and have no plans to return which has prompted the association to start discussions with post-secondary institutions to set up scholarships or internships to get more people interested in the sector.