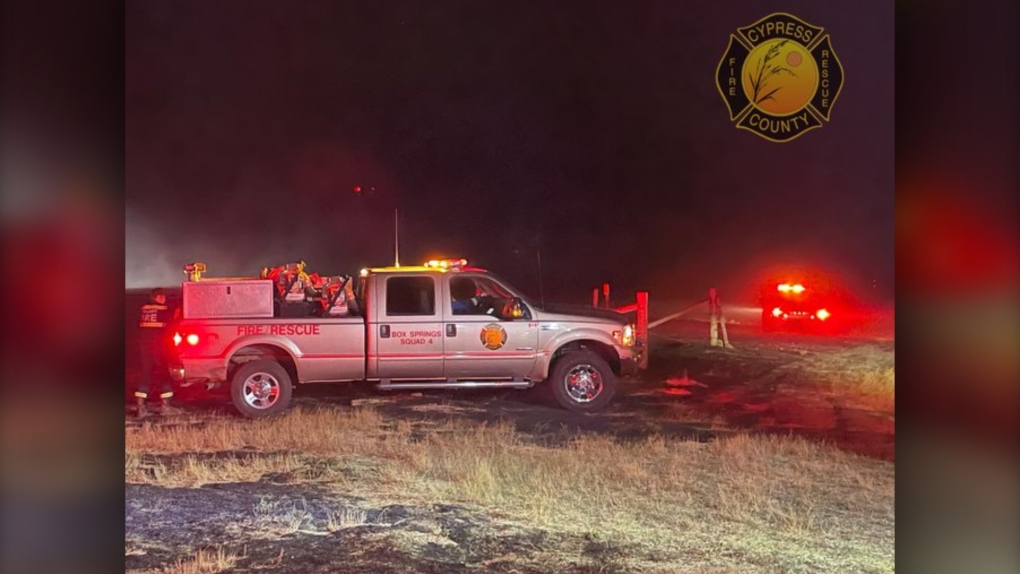 Fire rescue members at the scene of Thursday night's grassfire along the Trans-Canada Highway in southern Alberta. (Cypress County)

An RCMP investigation into Thursday night's grassfire along the Trans-Canada Highway in southern Alberta has determined the fire was not deliberately set as originally reported.

Members of the Redcliff RCMP and Cypress County fire stations responded to a fire centered near Range Road 82, between Suffield and Redcliff. The fire spread over an area approximately 750 metres wide and 90 metres long.

RCMP officials say dash cam video footage suggested that the fire was ignited by a spark from a tire and the fire has since been deemed accidental.

Cypress County remains under a fire ban that went into effect on Aug. 10 due to dry conditions and hot weather.

Multiple stations responded to a grass fire between Redcliff and Suffield on Highway 1 at 9:30 p.m. last night. #CypressCounty pic.twitter.com/fcJpb42ogM

A $1 billion class action lawsuit has been filed in the Court of King’s Bench against the Government of Manitoba and the Attorney General of Canada related to the child welfare system in Manitoba.

The Supreme Court of Canada will take time to weigh arguments about the constitutionality of an 18-year refugee agreement between Ottawa and Washington after hearing a challenge Thursday from claimants and human rights advocates.